From door to door it took us 33 hours. That is from our frontdoor in Breda to the door of Dean and Anja's house in Cairns. We survived it relatively fresh. We were very well taken care of in the aircrafts of Singapore Airlines and Virgin Australia. Our bikes came out intact as well, though in Sydney the cardboard boxes appeared to be in a very bad shape, as if they had been out in the rain. The Australian customs people showed that the general cliché that says that Aussies are laidback and friendly people is true, they taped the boxes up for us, so that we could continue to the next flight.
In Cairns Dean and Anja stood waiting for us and drove us to their tropical home close to the small airport. We got in touch with these very kind people and experienced cyclists through Warmshowers.
The next day we spent with activities like putting the bikes together again and do some shopping: getting Australian simcards, buying a gascontainer for the stove and what took most of the time, finding a replacement for Eveline's Kobo-ereader. The device was a present given to her at her retirement. It should make the next bike tours lighter, as it would save the weight of one pannierfull of books. To our disappointment the thing appeared to be dead when Eveline wanted to use it in the plane. Helpdesks and all the rest that we tried didn't solve the problem, so in the end we bought a replacemnt. This was not easy, since there are not many bookshops here, and ereaders appear not to be sold there, but only in electronics shops and then it's only Kindle. At last the adequate young lady of the information desk in the public library knew a shop where they had Kobo. This appeared to be true and the people there were so pleased to be able to get Eveline back to reading again that they gave a 20 dollar discount as an extra. How about nice Aussies?
Tomorrow Dean will take us on a small tour to the Esplenada, the beach-boulevard and most likely we'll head north after that to Port Douglas. One of the things to be done there is an excursion to the Great Barrier Reef; glass bottom boat, submarine or just snorkling, we're going to see what will happen.
Posted by Frans at 15:21 No comments:

Back on our wheels again

We had a good “summer of recovery”. Now we have said goodbye to neighbours, friends and family. Our house is spic and span and we emptied some wardrobes, so that the new temporary inhabitants will feel OK. We are reading our beloved newspaper NRC for the last time and we have nothing more to do than wait for tomorrow morning 07.00 hrs for a taxi mini-van to pick us up and take us to Schiphol airport. Then, after 27 hours, we hope to make a safe landing in Cairns, Queensland, Australia, where we will be picked up by our new warmshowers hosts. They have already biked a large part of the route we want to do, so there will be a lot of information exchanging. All in all, we're back on our wheels again. 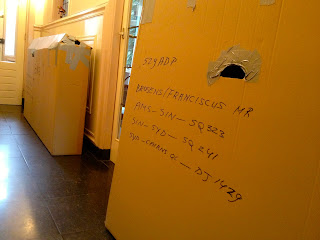