It took us three uninteresting cycling days and a two hour ferry to reach the busy metropolis of Istanbul. We settled in a small and nice budget hotel right below the famous blue mosque, in a touristic but quiet part of the city and near the shore.
The part of the city is called Sultanameth and is the historic centre of the former Ottoman empire. Places like the Topkapi palace, the Hagia Sofia and the Blue Mosque are just a five minutes' walk away.
We stun with the breathtaking beauty of these places, as with the millions of little shops in the bazars and streets. How on earth can all these people make a living, selling similar stuff in similar little shops for similar prices. As if every third person in this city owns a shop and every second a restaurant or köfte büfe.
All in all we find Istanbul a buzzling place, combining old tradition and state of the art modernity, with very busy but also very quiet places and, for sure, not unagreeable at all. Kind people and relaxed atmosphere. Three and a half day of walking around and inhaling all these impressions filled us up completeley.


Tomorrow we'll use a ferry/cruise boat on the Bosporus to take us north out of the city and towards the Black Sea. After disembarkation we'll only have to cycle some 20 k before we'll reach our next destination, the town of Riva on the Black Sea coast. Stage two of this trip will have started then.
Below: View from Galata bridge and Water pipe ladies. 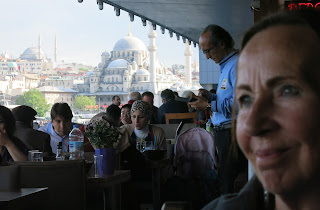 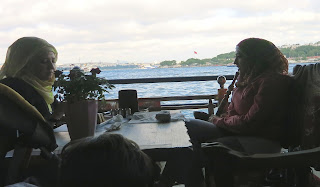 WW I is not much thought of in the Netherlands. No wonder, as a neutral power we didn't participate. Not that it passed unnoticed: we took in over 100.000 Belgian refugees on a population of just over 6 million. (Compare such generosity with todays!). If WW I is mentioned in the Netherlands it always concerns the battles in Belgium and northern France. Understandable, as the massacres there were of an unspeakable nature.
Travelling through Australia two years ago we could not but notice that there views on things are different. ANZAC is a notion that has great meaning for the Australian national identity.
ANZAC stands for Australian and New Zealand Armed Corps. This was a combined expeditionary force of the two then very new countries that was the first to be sent abroad in order to participate in a conflict elsewhere in the world and therewith proof that these countries, as young as they were, claimed their position in the world community.

Disaster. In April 1915 ANZAC was put into action on Gallipoli, the peninsula that dominates the Dardenelles straits and as such the sea route to Istanbul and the Black Sea. The idea of this British/French initiative was to capture Istanbul and thus put Turkey (ally of Germany and Austria) out of the war and be able to supply the Russian ally with arms and goods. The campaign lasted for 8 months, only to end in a retreat and no achievement what so ever. 500.000 men were involved, 150.000 killed. Mostly Turks,then British, French, Australians, New Zealanders and Indian.
Today we visited the sites of the landings and battlefields and the numerous memorials. Also for the Turks this period of war is still felt of immense importance, as the commander of the Turk forces then was a young officer called Mustafa Kemal, who presented himself here as a great leader and who only a few years later founded the modern new Turkish state. Now he is considered the father of all Turks: Kemal Atatürk. 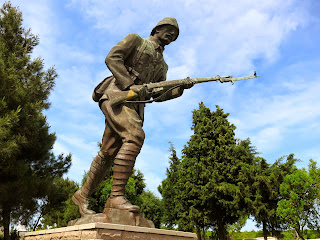 Darius, Xerxes, Alexander and us....

From Halkidiki we headed eastward. Somewhere on our way we left the region of Macedonia to enter into the region of Thrace. This is a region that strechtes out in three states, Greece in the west, Bulgaria in the north, and Turkey in the east. It has always been the passage way between the Asian east and the European west and thus a region where cultures met and mingled. On our way east we gradually saw the influence of islam become visible, more east means more mosques and more veiled women, also in this part of Greece. 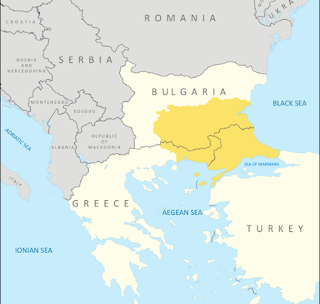 In ancient times Persian kings named Darius and Xerxes passed through here on their way westward, and later Alexander the Great left Makedonia through here on his conquers towards the far east. About 120 BC the Roman consul Egnatia had the route surfaced and turned into a real road, therefore the name: Via Egnatia. And today the two of us use the same road on our venture to the east. So we are certainly not the first travellers to pass through here and use this pavement, we feel in good company (though on different means of transport). 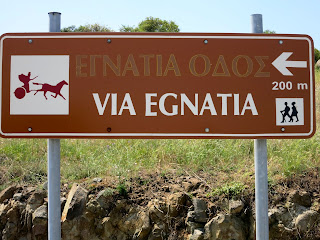 Continued with a very particular toast

Yesterday we arrived with a Transavia flight in Thessaloniki. Miraculously we found the bus station for regional Halkidiki-buses. Though the bus driver protested I managed to get the bicycles on board and as a result we found ourselves back in Ierissos two hours later. Ierissos is the place that we cycled away from in the morning of September 13th 2011, only to be stopped by force just eight kilometers further.

Here we were today, at the very same place. Here Eveline was knocked from her bicycle by an oncoming car that used the left side of the road as it was passing another car. Here she was picked up by an ambulance and taken to the hospital in Polygoros and there it was that they found the tumor.

If there and then there had been no accident........
Therefore we stopped at the exact spot (I knew where it is because the track log of that day stopped there) and, surprise, Eveline presented a small bottle of champagne from her panniers and two plastic glasses. We toasted on life!

As life continues, so does the trip. Today we ended after 83 kilometers in Ofriniou Beach in a nice guesthouse, enjoyed a cold beer, some white wine to accompany the calimari and fried fresh squid. 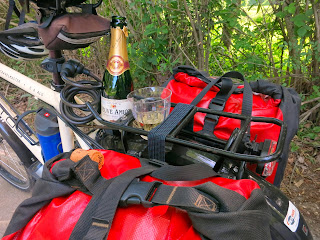