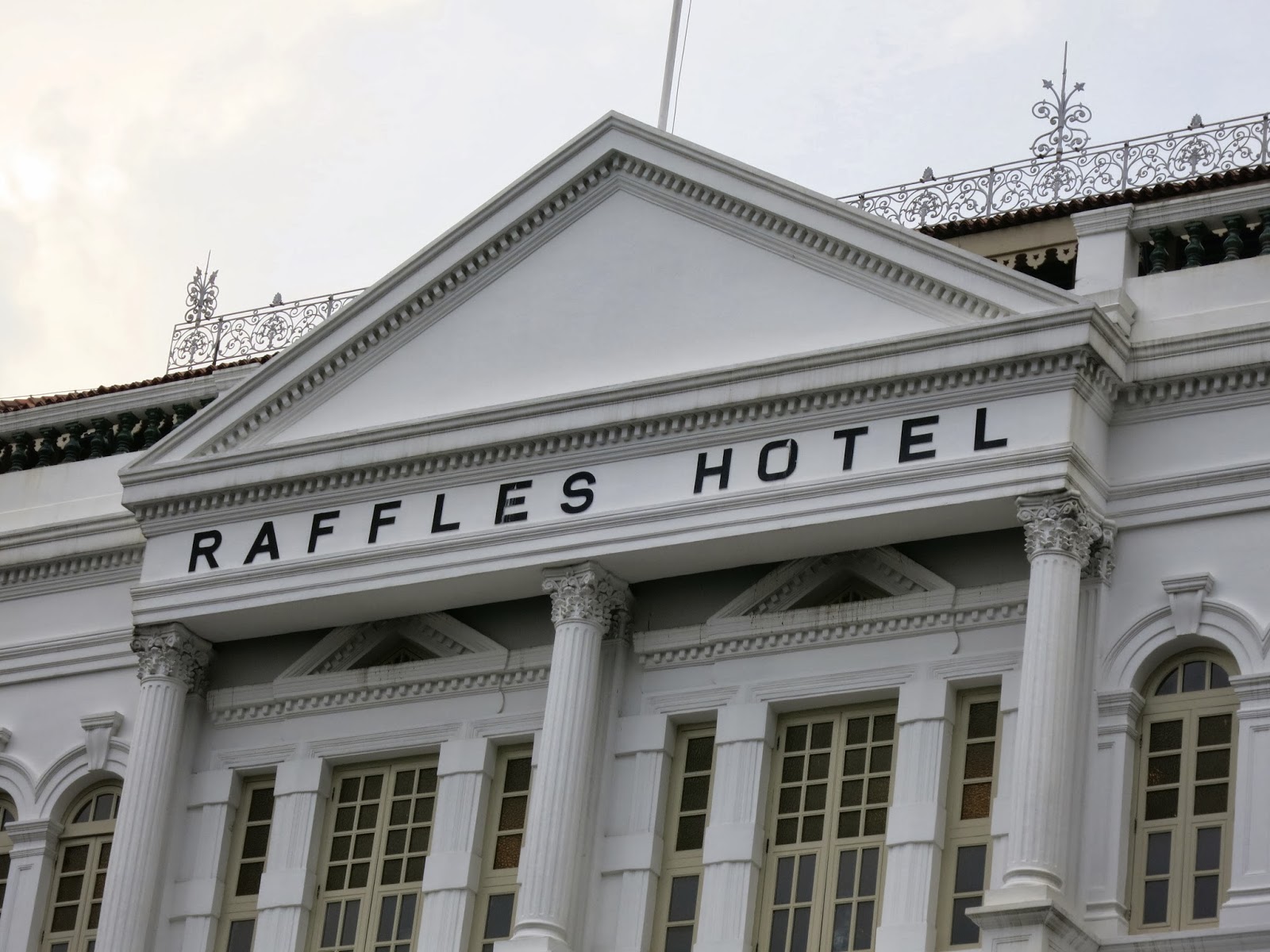 So we are in Singapore. We pedalled away 3800 kilometers to get here from Chiang Mai in the north of Thailand.
It was an interesting trip and we enjoyed it. We met no difficulties or hardships. We had one flat tyre, that was all.
There were days that were long, or boring, or with too much traffic to feel comfortable, but those were exceptions. Most of the time we had good roads in nice scenery. Thailand is easier to travel through than Malaysia, the Thai are much more tuned to tourists and as a tourist you will always find what you need at that moment. In Malaysia this is different. Part of that is due to the fact that this country lacks the lovely beaches and islands that Thailand has in abundance, but we think that the cultural difference is a big factor as well. The Thai are buddhists and behave in a relaxed and easy going way, the great majority of the Malay are muslims and this culrure has a lot of rules, do's and don'ts that you're not aware of in Thailand. So Thailand remains our favourite.
Singapore is a very organised place. Things work here and the city looks fine. After a first night in a guesthouse we moved to a Warmshowers host in a village like little part of the city, on walking distance from Singapore river and the city centre where the highlights are. As we usually do we visited the musea and parks etc. Eveline did her “I want to have ran in all the world's big cities”-run, twice this time. 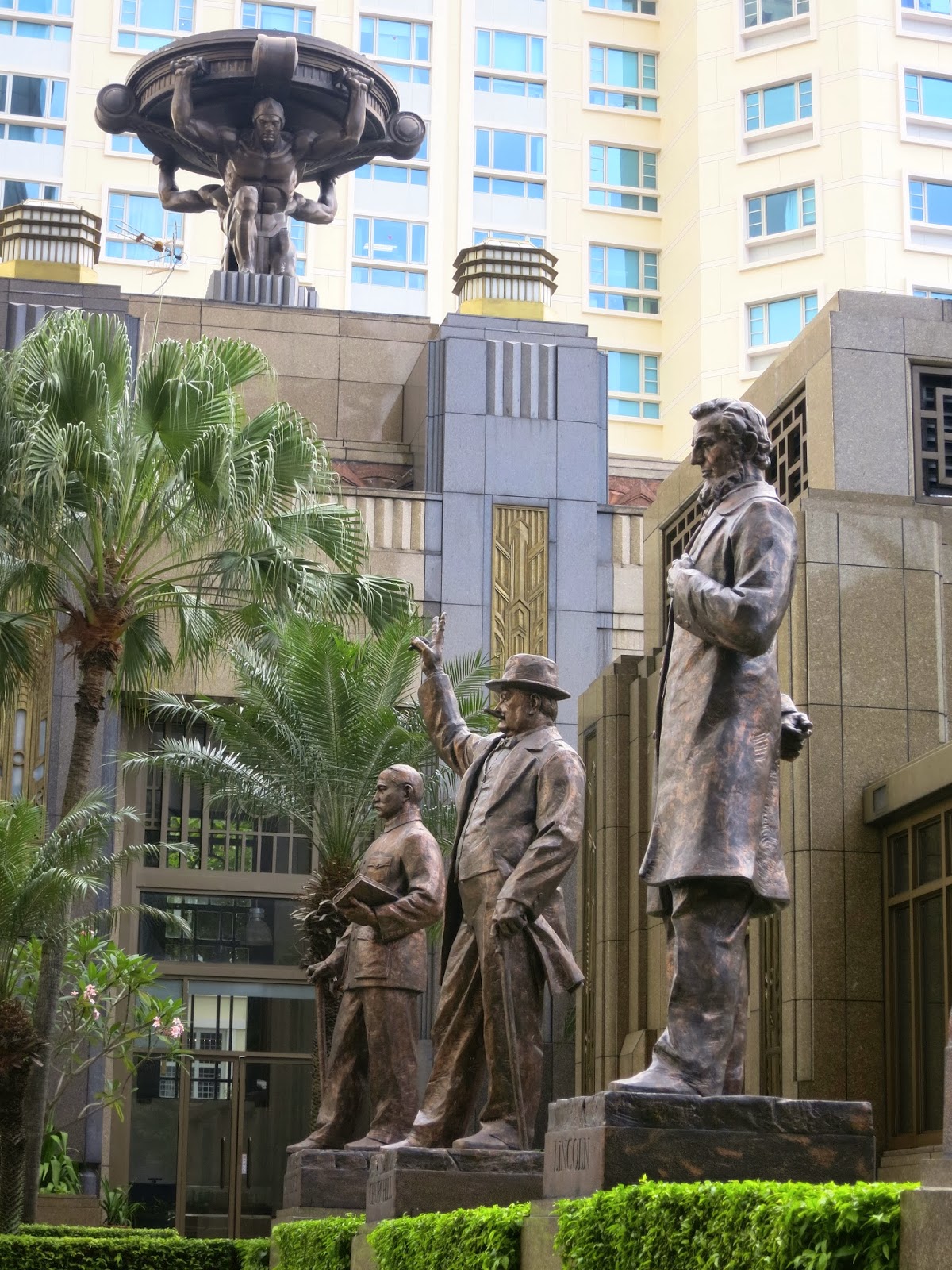 Now it happens that our Warmshowers host, her name is Kristel Zweers, is a comedian (click on her name for her website). She has done three one-woman-show theatre tours in the Netherlands before she moved to Singapore, where her husband has a job in the offshore industry. Here she has started up her own business as an improvisation trainer and regularly she's on stage in stand-up-comedy shows. So yesterday we were in the Blu Jaz café and enjoyed an hilarious evening during which she was one of the performers.
Again: Warmshowers is awesome! 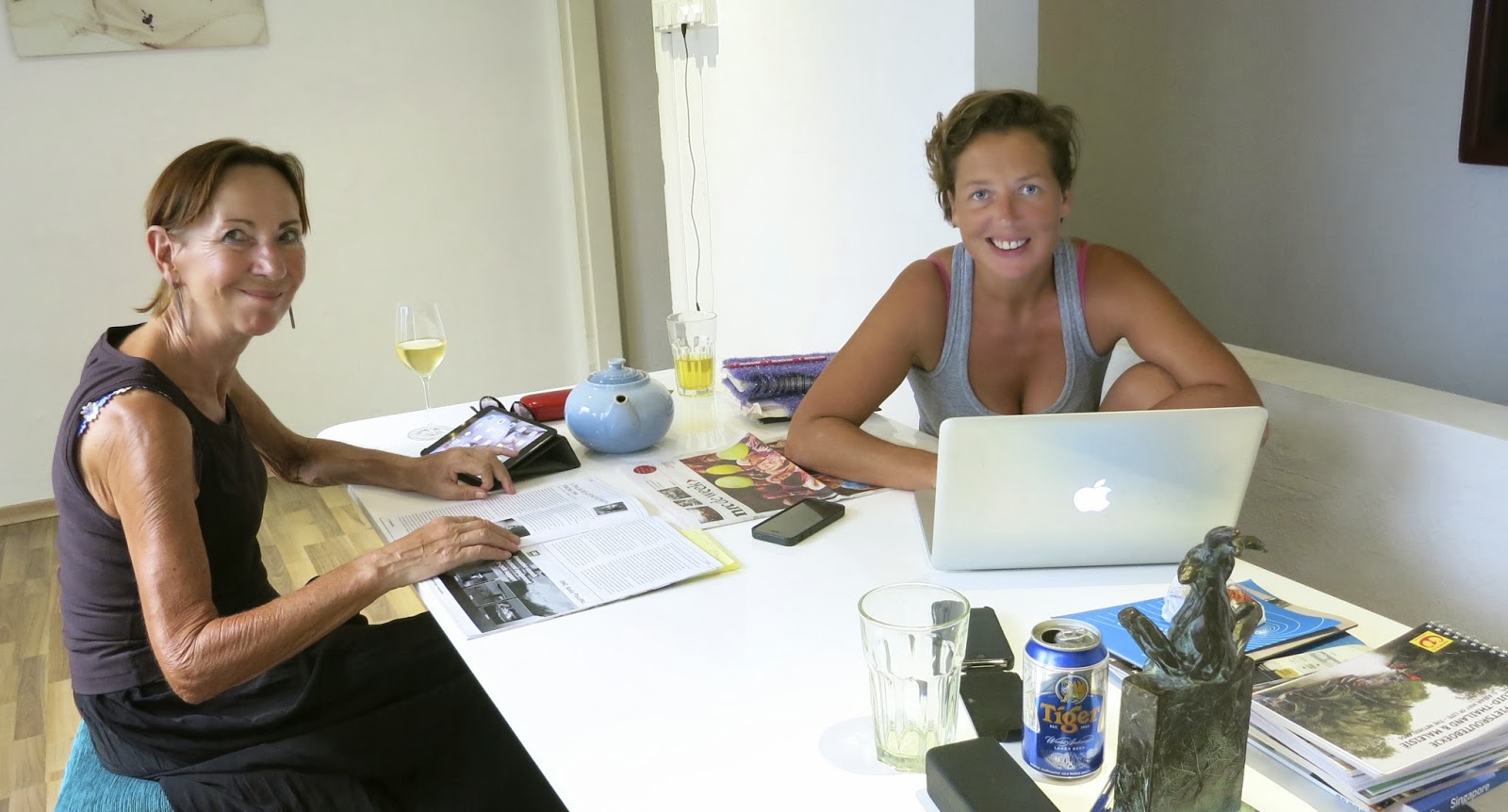 This very last day we'll do another walk, to the Marine area this time, and then pack, wait for the mini-van taxi to take us to the airport.
Breda, here we come!

Posted by Frans at 04:58 No comments: Links to this post 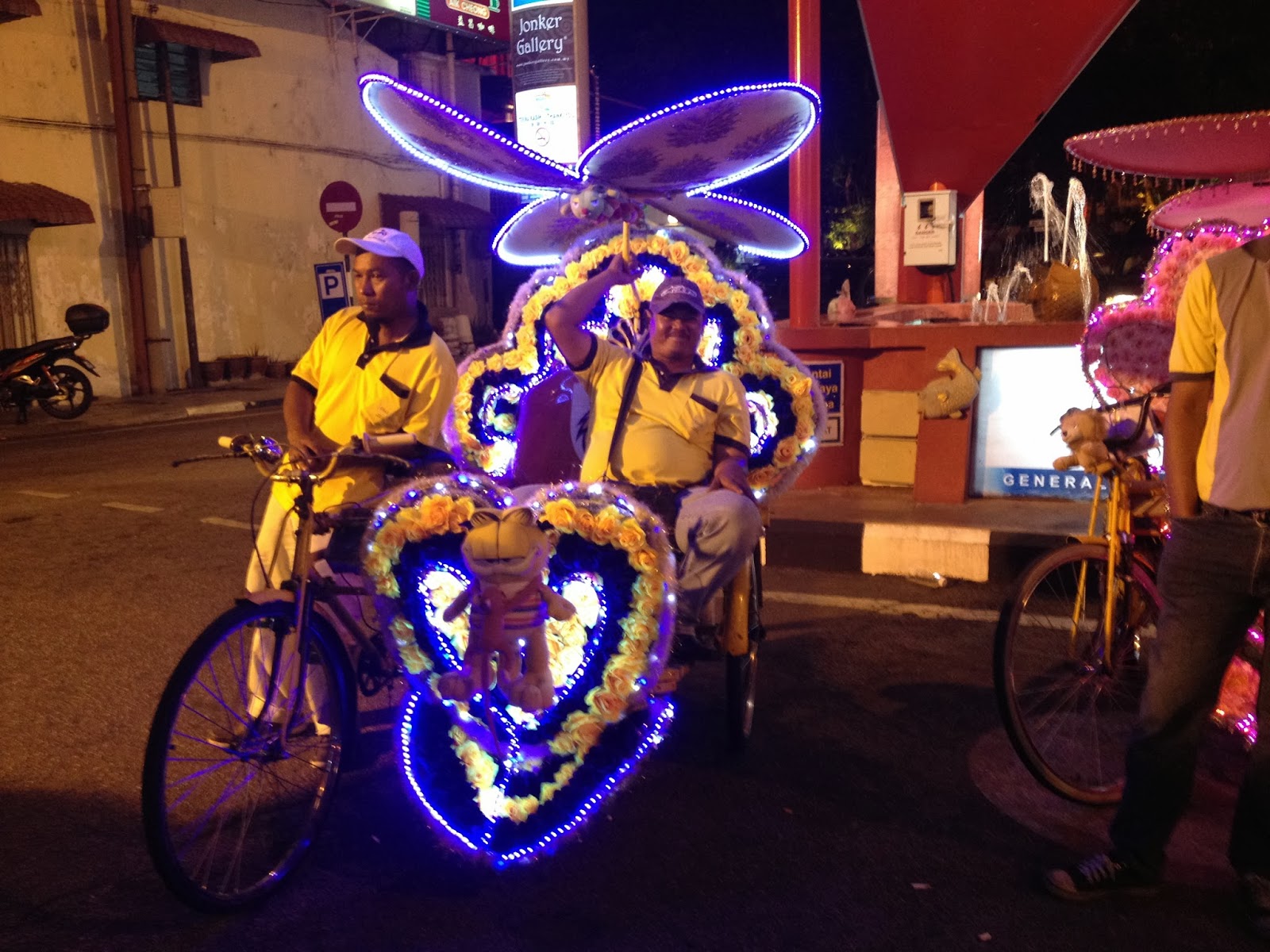 As mentioned before we happened to be in Melaka on the days of the Chinese New Year. Therefore the town, at least the Chinese quarter, was overcrowded.
We did the Dutch heritage walk which took us from the Stadhuys (old Dutch for town hall) and a bastion called Fort Middelburg (the name of a historic town in the south west of the Netherlands) via historic VOC-mansions and government buildings to the only city gate that's left and was built by the Portuguese even before the Dutch arrived. Then there was the Dutch graveyard and Saint Paul's cathedral on top of the hill that overlooks the town and old port. There was the gravestone of Mrs. Van Riebeek, wife of the founder of Capetown and Batavia,now Djakarta. Thrilling to see the history lessons of the fourth and fifth grade of primary school coming to live here.
Other graves showed how harsh life must have been these days: many died young, in their twenties and thirties. One gravestone in the cathedral referred to a mother of 24 and her four children who all died within a fortnight from diftheria, “leaving the bereaved husband and father to bemoan their irreparable loss”. This certainly quiets you down for a couple of minutes. 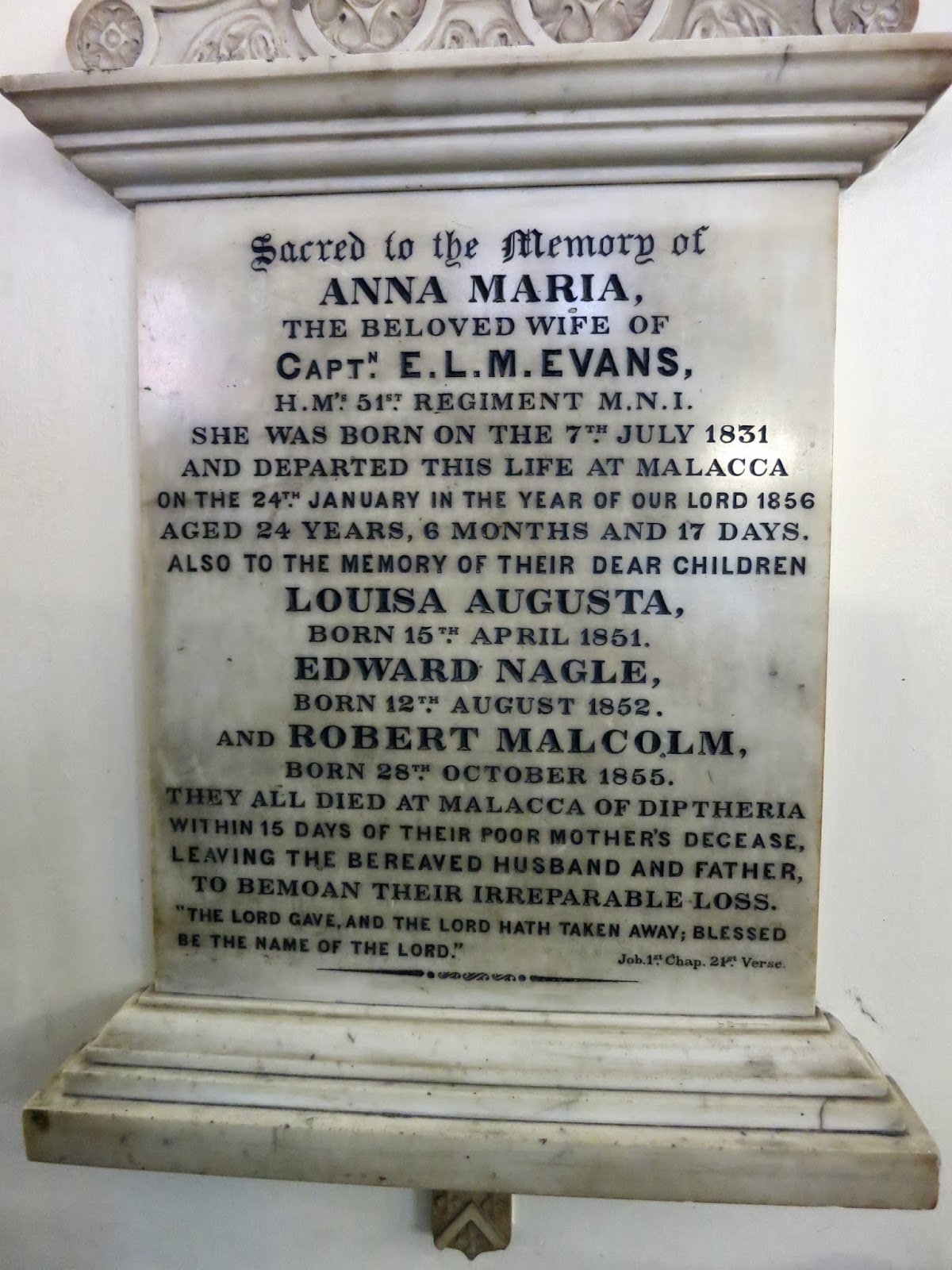 This was all very interesting, as is the way how the local tourist industry deals with this history. On one particular street there are trishaws active, those 3-weeled bicycle-taxis. These guys are crazy. They have decorated their vehicles with the utmost kitsch-rubbish in the most akward colours. It is not funny any more, way over the top. Disneyland would fire them immediately, and you know about their good taste :-). And the real lunatics among them have mounted a loud car-audio system on their fairy vehicle. There are only very few locations where you can sit, relax and have a drink (this is Malaysia!), and just there they constantly passed with their blaring raggea, Hindu-hymnes and Indo-China-honey-pop. I just hated them.

Four days later we reached Johor Bahru (JB). This is the city on the border with Singapore. Three days along the coast, not bad riding, though the heat became a real factor. We always started early, but could not prevent riding in temperatures of 35 ˚C and more. February is already summer here, and we're almost on the equator. Hot! But as long as you ride, you're OK. There are two bridges that cross the water between Malaysia and Singapore. One is forbidden for biccycles. You can use it, but only with the bikes in a taxi or bus. The other one can be used, and we decided to do so. The roads towards JB were horrible. I mentioned the lack of planning in the infrastructure in this country. We had to ride on 6 and 8-lane motorways without a side lane for tens of kilometers. Scaring, loud, nerve-wrecking. And consider that the Warmshowershost that we were heading to in JB had figured out the most quiet and bike-friendly route, I had it in my gps.
Our Warmshowers place though was a ground floor apartment in a guarded gated community with all amenities, including swimming pool and all that. A relief. And the host was not even there, we were given the keys of the house by his young cousin. I repeat: Warmshowers is awesome!

The next day the ride into Singapore was totally different. As soon as we had crossed the bridge and got through customs we were on clean, wide, shady and quiet roads. A lovely ride through a hilly park like countryside to the city centre and our guesthouse in an old shophouse amidst the skyscrapers.


Later we heard why roads are so quiet in the million people city: in order to be allowed to buy a car you first have to by a license to buy a car. It costs about 80.000 Singapore dollars, which is more than 46.000 Euros. Then you can go and buy a car. Did not prevent us from seeing a convoy of at least 20 Maserattis, Porsches and Ferraris roaring by the first day we were there. 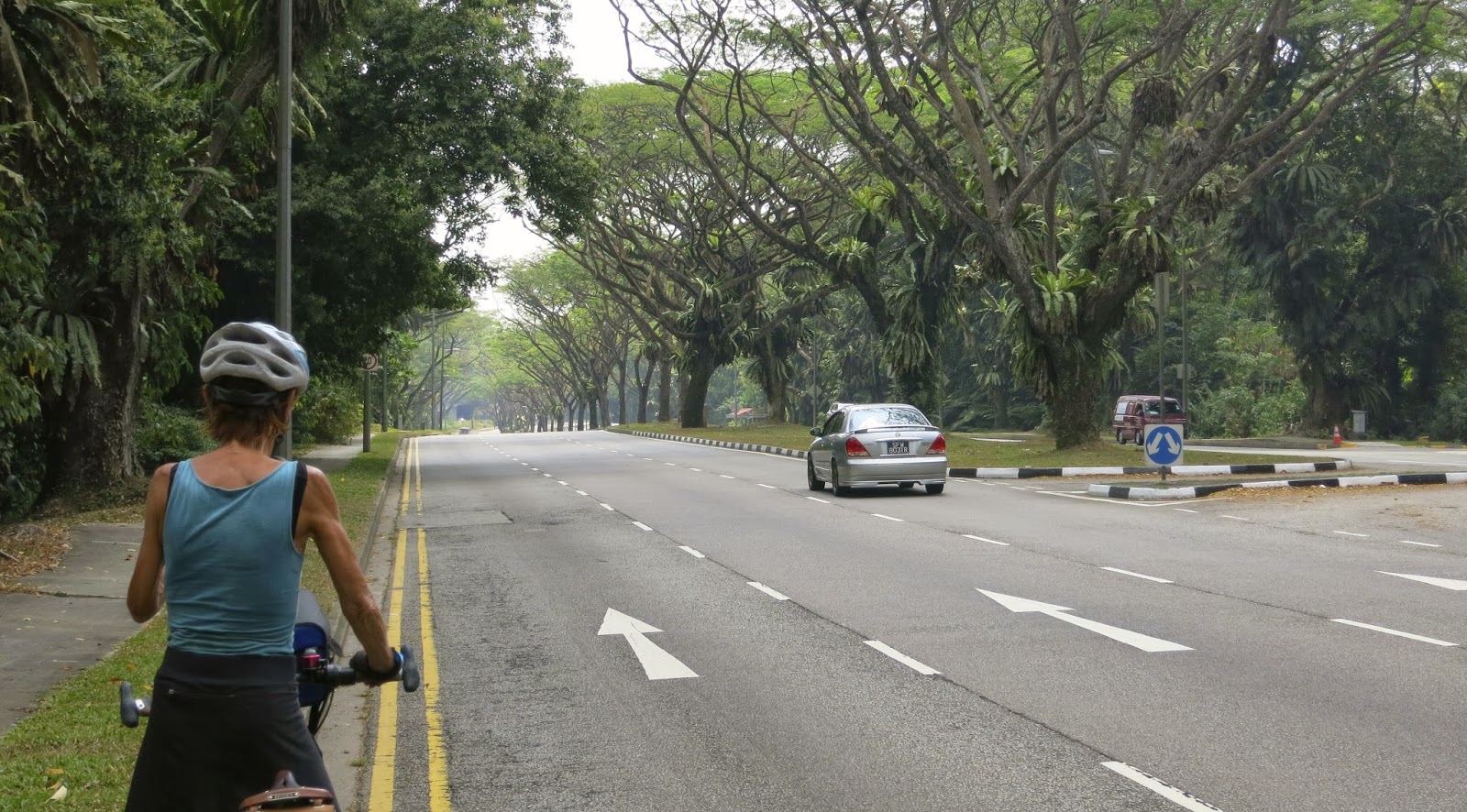 Posted by Frans at 14:37 No comments: Links to this post 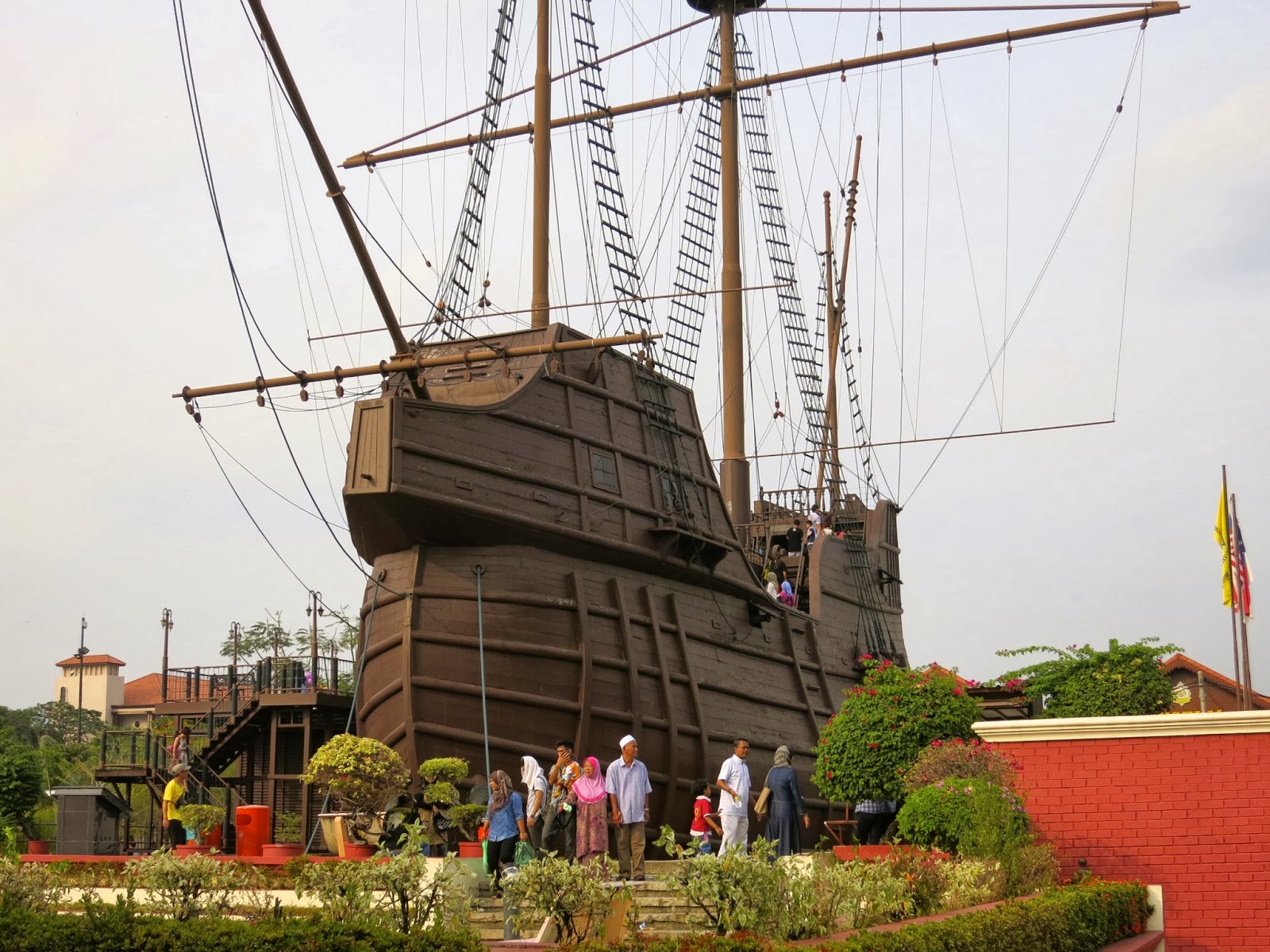 As a little boy in primary school I loved the geography lessons. The world opened itself to me. We also learned about our then recently lost colony, the Dutch East Indies, now Indonesia and the peninsula next to it, called Malakka, now Malaysia. At secondary school my English teacher, mr Vonk, was born and bred in our East Indies and we, as young as we were, felt that he'd rather stayed there and that he didn't belong in the cold and wet low lands. He was a nice man and there was nothing in his name or outer appearance that betrayed his origin but for the words he now and then used, he sometimes spoke Malay. That was the language of his former homeland.
While walking around here in historic Melaka it is not hard to realize this. The Dutch have ruled this place for a good 130 years, till they had to leave it to the British when Napoleon conquered the Netherlands. The Dutch, that is the VOC (United East Indies Company), had taken it over from the Portuguese, who landed here as early as 1512, subjugated the sultanate and founded their trading post and fortified it and thus founded the city of Melaka.
There is a historic walk to be made here, the Dutch heritage walk and it goes through streets with names as Heeren street and Jonker street. This part of town is a Unesco world heritage site. The Chinese shophouses appear to be built by the Dutch colonizers, and they continued on the patterns made by the Portuguese. They deserve the adjective Chinese only because they have been used by Chinese traders for the last couple of centuries.
The whole heritage quarter with the Dutch street names is now a complete Chinese quarter. The Malay and Indian people live in other quarters. We happened to arrive here on the eve of the Chinese New Year. And for them this is the new year, not that of the rest of the world. There is a 4-day holiday and it looked as if all Malay and Singapore Chinese had come to Melaka. The streets were overcrowded, you could walk over the heads. People went to the temples, of which there are some, and worshipped in masses. Clouds of incense over the streets. At midnight big fireworks were set off, there was a dragon dance and the crowds kept on coming. They walked the streets, visited the stalls where food, trinkets and all kinds of new-year-stuff (red!) was sold. The festivities lasted for 4 days, exactly the days we were there. We were glad when it was over and there was some quiet again, but also glad that we were part of it.

Our arrival here was not so pleasant. We had an appointment in a guesthouse, that was also a Warmshowers member. To make a long story short, it appeared to be a place that was old, not very well maintained,chaotic, unclean, delapidated. The owner was nice and friendly, but we didn't feel well there and we spent a whole day trying to find alternative accommodation. Which was hard, since all the Chinese had come to Melakka for the New Year and there was nothing free. At last we managed to find a simple, but clean and tidy place right next to the Chinese quarter. But a stressful first 24 hours.

The Dutch Square with the Stadthuys in the background. 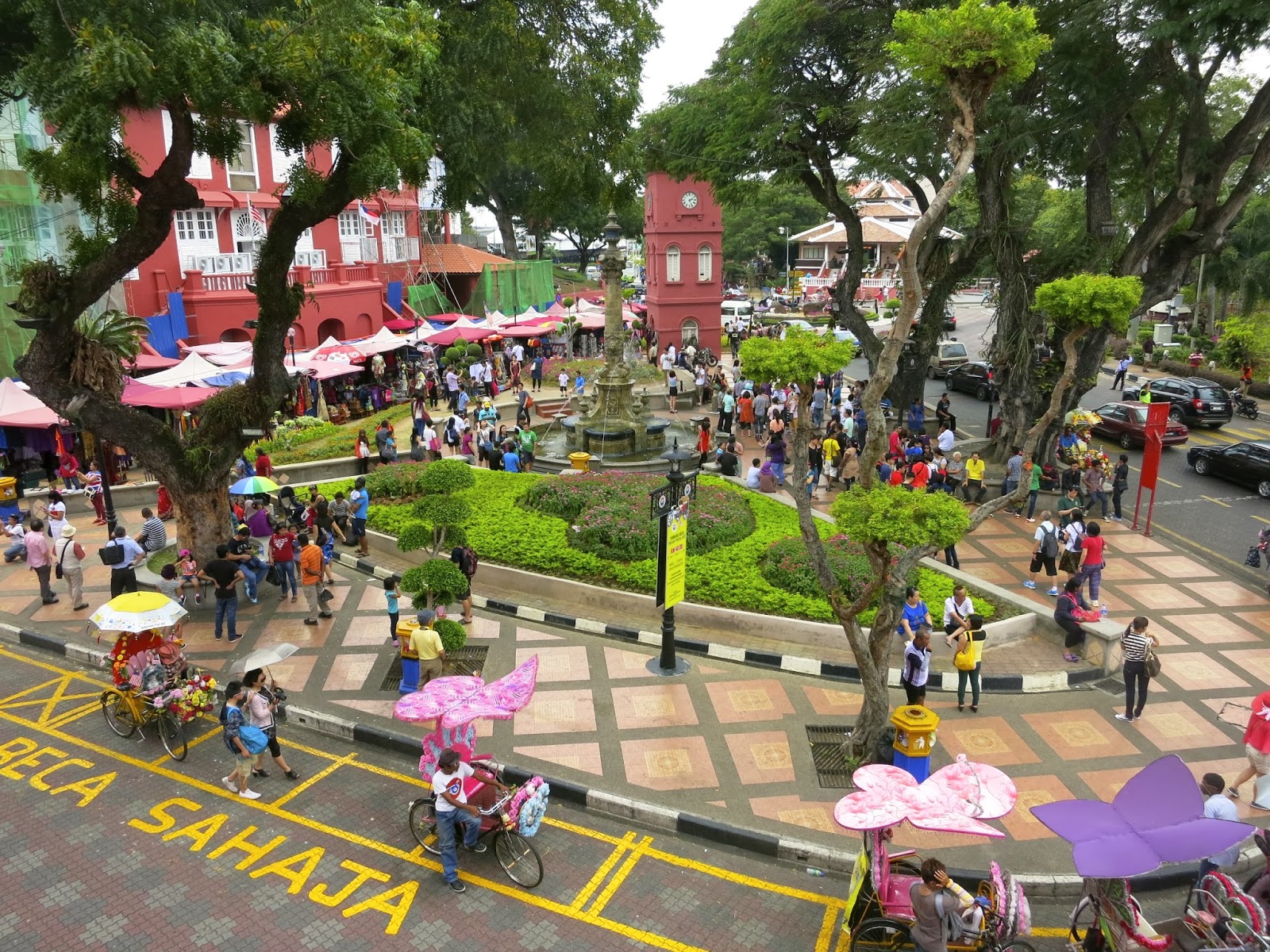 Posted by Frans at 15:47 No comments: Links to this post