An old friend of ours invited us for the celebration of his 70th birthday in his nice summer home on a mountain slope behind the little church of the dito village of Lunas. A good opportunity to combine this nice event with a bike tour somewhere in France. So we made a set tour in the Provence, just 6 days from hotel to hotel, all pre-booked. Easy. 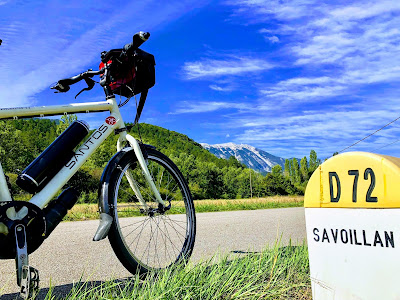 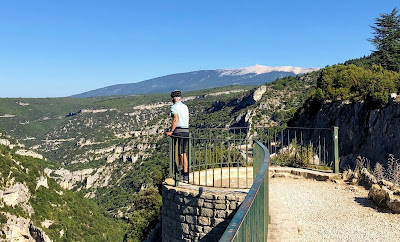 The tour turned out to be very nice and most of the time we had a view on the summit om the famous Mont Ventoux. We did not venture a climb to the top, but easily rode our electrified bikes more or less round it. One very rainy day, the rest of the time fine sunny cycling weather, combined with a beautiful scenery and the French rural cuisine.
We concluded this trip with an amazing and very happy three-day-party, where we met with many old friends in a supreme atmosphere. Such nice days.

Our first - short - European tour: we took a (crowded) train to Roermond. There the tributary river Rur (in Dutch: Roer) flows into the Meuse. We followed it upstream to Dürenb in the north-Eifel. From there we rode to Bonn, a nice city on the Rhine river. We visited the Art Museum there, where we more or less discovered August Macke.This expressionist painter was born in Bonn and died in the first year of WW I as a soldier in the German army at the age of 27. In spite of his short life he left us a great number of beautiful paintings. We also paid a visit to his home, which has been turned into a nice museum dedicated to his life and work.
Aftyer Bonn we rode into the Eifel to the historic little town of Ahrweiler, then to Koblenz, where Moesel and Rhine merge. Again a nice historic city with a nice art museum (Ludwig). A bit south of Koblenz the river Lahn flows into the Rhine. The ride up this Lahn was very beautiful. After three days we left this river to cross over two the Eder river. This river flows into the Fulda river, which passes through Kassel. There we visited Die Neue Galerie and continued along the Fulda to the place where it flows into the river Weser. Somewhere along this river we experienced a traditional meal: when we entered a restaurant (Fährhaus) we were so lucky to be on the night that there was a 'Schlachtbuffet'. Heaps of all kinds of meat and "all you can eat". Great.
The next day we already left the Weser, turned west and followed Europa Radweg 1 towards the Netherlands. There was a strong headwind and rainy days were forecasted.  Three days later, still dry, we got on a train in Winterswijk (the first Dutch town on the border) and travelled back to Breda. On the way from Breda station to our house (3k) we got wet by a heavy rain shower ;-).

Our last tours in Japan and South-Korea were rather mountainous ones. The Japanese coast line is up and down all the time, and so is South-Korea, except for most of the river-cycling-routes. At a certain point we were more or less surprised when, without being well prepared, we found ourselves cycling past the alpine center of the Pyeongchang Olympic winter games. Hardly a place to expect cycling travelers, to be honest. 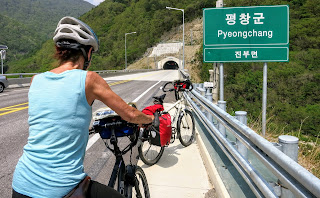 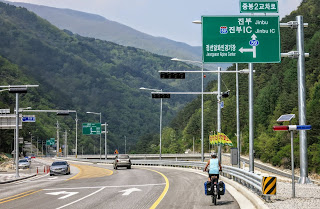 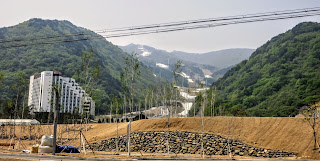 Evaluating these rides we came to the conclusion that we find this a bit too hard. We then decided that we would change to e-bikes. We suppose it to be a taboo, but considering our experiences and our ages we did not hesitate too long. Also we decided to stay in Europe from now on, no more long flights to other parts of the world.
So our next blog will be electrified ones. (though I still ride my  Cannondale mountainbike, even in the Alps!)

I kept my Santos Travelmaster and had it equipped with Pendix eDrive. 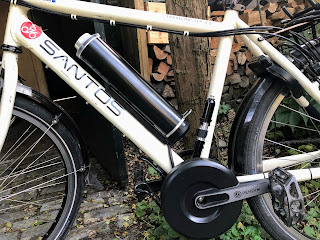 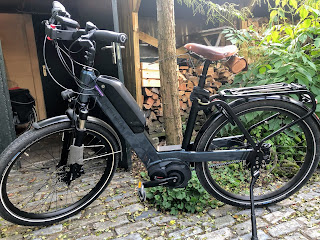