It's a cliché, but in general the Japanese are small compared to north-west-Europeans. Small in almost everything, in length, in foot size, in steps when they walk, in space that they claim around themselves, in the movements they make, in noise that they make, in cars that they use and in living space. The population of this island empire (app.126 million)  is mostly concentrated in the coastal areas, where there are some flat spaces to build and live on. This is only a very small part of the country and for this reason they live very close to each other, often in very big cities. Consequently there is very little private space per capita available. So - still generally speaking - houses are small and in the house the rooms are small. And parking spaces for their cars are small. Now it's my observation that they are car-lovers. No wonder, they produce the best brands of cars in the world. Now some of you will start staggering and mumbling words like 'German' etc., but just check the statistics: Japanese cars prevail.
So what choice do car owners have when they belong to this generic type? Own a small car, it seems obvious. And small doesn't always mean small in capacity. Although you see all kinds of cars the number of compact space cars are great. These cars are 2.5 meters long, 1.5 meters wide and have the hight of a man. Like driving biscuit boxes. Suzuki even has a model namen N-box, so there's no beating around the bush here. Small boxes that can transport the whole Japanese family any place! 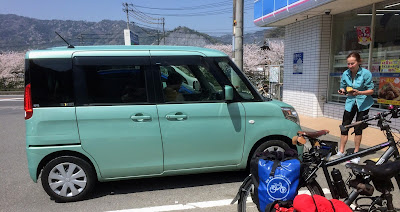 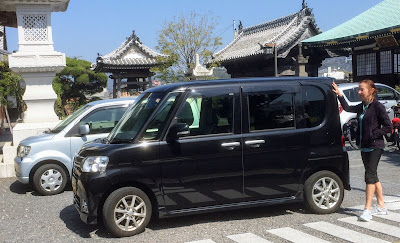 One more striking phenomenon here: it's quiet! Cars hardly make any noise as they drive quietly, you don't hear people shouting (there are not many people about), there's no loud music, no hassle. As far as we know Japan now we find it a pretty silent place.