In 4 stages we made it to Tbilisi, Georgia's capital. Our impression of the country is one of rather much poverty. Compared to Turkey it is obvious that the Turks have done much better in recent times: roads are better there, cars newer, houses better. It's easy to imagine that the geographic location of Georgia, it's rather isolated site, it's small size, it's communist past and still the continuous threat of Russia in the north are factors that cause the current situation. Don't forget that Russia is still occupying part of Georgia, a comparison with what is happening now in Ukraine is easily made.
In the mean time we have learned to get along with the Georgians very well. We are now staying in a small agreeable hotel in a quarter of small streets, with a bit of a scruffy market and lots of little shops. A huge room, ensuite actually. Staff is friendly and service fine. Yesterday they did their very best to help me get our bus trip to Batumi organized and when all of that was finished we were presented a one liter pitcher of home made wine.(Every Georgian makes his own wine it seems).
In some parts of this city you feel like in a European city. In “Old town” there are some little streets with only restaurants, terraces and bars. Very touristic, but nice. Prices are twice the prices we had to pay elsewhere in the country. Some main streets even have 'grandeur'. But as soon as you look into a side street you will see unpaved roads, disrepair, dirt, dust, ramshackle houses. The majority of cars is very old, obviously used cars from all parts of the world are imported, a striking number of them has the steering wheel on the right hand side. There are a huge number of those very small shops, on the pavement you will stumble over people selling all kind of small things and there is a great number of beggars. Most repulsive is the mothers who are sitting on the pavement and who have trained their little toddlers to beg agressively, clinging to passers-by and even hitting them if they don't get something. Seeing that I feel like hitting the mother in the face and holding them responsible for ruining their children this way.
But this all belongs to cities like this one. For countries like Georgia there is still a long way to go economically, politically and culturally and my hope is that it will be given the opportunity to do so. You learn a lot from travelling. Here and now I realize again how lucky we are to be citizens of a West-European country. Wish at home more people would be aware of that. 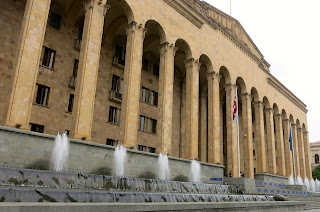 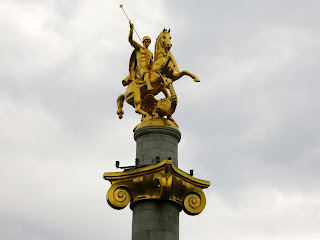 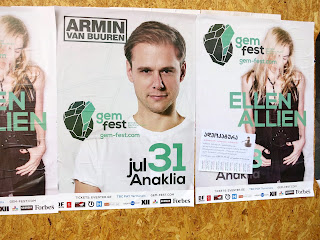 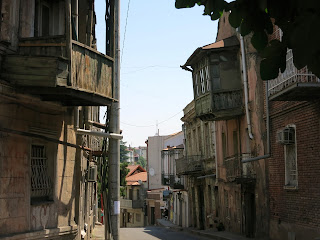