You may know that we travel on bikes that were specially designed for travelling over the world. It's a young Dutch brand, Santos, the type is Travelmaster (26 “ alu). Equipped with Rohloff speedhub and belt drive, Magura rim brakes etc. In the Netherlands it's one of the favourite brands among bike-travellers. Until now we never saw a foreigner on a Santos bike. Until now, because last week it happened. In the far east of Anatolia, 50 k from the Georgian border in the far away mountain village of Hanak there is one. This is the story: in Hanak there's one of the few Warmshowers-hosts in this part of the world. We were in touch with him; Cüneyd Isik, a young policeman. He could not host us as he was having a nightshift. But to our surprise a cyclist came riding up to us when we were approaching Hanak after 90 k and a mountain pas of 2215 altitude.
It was Cüneyd on his bike and to our big surprise he was riding on a shining Santos Travelmaster, exactly like ours. Our mouths fell open, what is this? He appeared to be a big fan of the brand and is one of the few Turkish Santos owners. It caused a special bond between us. He accompanied us to the ögretmenevi (teachers' house) where we would stay the night, we had a nice chat, took a picture and off he went to do his duty. 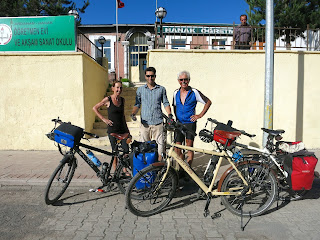