Esfahan, the most beautiful city of Iran

As far as we can judge this is a true statement. Contrary to other places where we have been this city has many tree-lined and thus shaded avenues, which makes strolling around a lot more agreeable. Then there are many sites to be seen, such as the main square, palaces, mosques, parks, musea, even of contemporary art, and the latter we consider very special in this religion-dominated and traditional country. 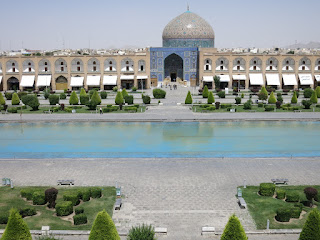 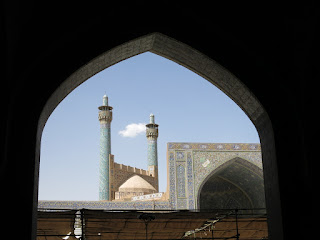 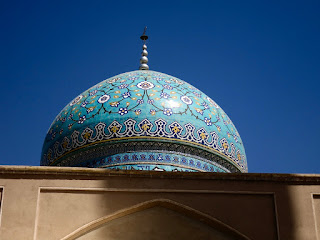 There's also a river running through the city, hundreds of meters wide and now completely dry. To the citizens' regret, as they told us, just a couple of days ago they dammed the river upstream in order to secure the water supply in these dry times. The river is crossed by several bridges, among which some very old and beautiful ones, especially the one with the 38 arches.

As we have not many days of cycling ahead of us we stayed here for 5 days, spending our time with leasure visits to the sites and reading.
Ramazan (z instead of d) makes it a bit more complicated. Only in the big hotels you can have food and drinks during the day, the rest is closed. But, as a matter of fact, we are surprised that there are so few cafés and restaurants here, you have to search for them with a candle. Strange in such a touristic place.


Then a general remark about the traffic: Though we have never found ourselves in danger yet, the way the Iranians drive their cars is next to lunatic. There seem to be not many traffic rules to adhere to. They just cut you short, block your path, park in the middle of the streets, open car doors or drive away without checking their mirrors, make u-turns on busy streets, ignore red lights and so on. For us Iranian traffic is the worst that we ever experienced. They themselves don't bother and they simply remain the most friendly people on earth that we ever experienced.
Posted by Frans at 07:37