Kashan, end of this trip's cycling

We reached Kashan after 3 days of desert cycling. A pick-up truck took us 50 k north of Esfahan, from there we cycled 80 k to Natanz. Very quiet road, no traffic, no villages, no gas stations. nothing. 4 k before we reached this town Eveline got a stroke of the heat (and dehydration). She was dizzy, had no clear view nor energy and couldn't go on. I stopped a pick-up truck and they took her to the town and the local hotel. I raced after them and found her back in the street in front of the hotel, recovered. No further consequences were felt and we soon forgot the whole incident.
The hotel was one of the worst ever, imagine that we spent there a whole afternoon with nothing to do in the hot room on not very clean beds, waiting for the heat to go.
We left at first light in the morning for Abyaneh. It's a pittuoresque mountain village at 2300 alt. We reached it at noon and fortunately there is a very nice hotel. The village was nice, but as we have experienced more often, the photos in the brochures are more promising than reality appears to offer. Though, after so many travels, I might be a bit blasé by now.
The next day ride to Kashan was relatively easy. 80 kms downhill. Nothing along the road again, real desert, sometimes very colourful. The only thing we passed was the Iranian nuclear facility, the topic of so many conflicts between Iran, it's neighbours and the US. In a wide circle around it there were guns placed with their barrels directed into the skies. Waiting for Nethanyahu's bombers? We passed and photographed without anyone paying us any attention though. 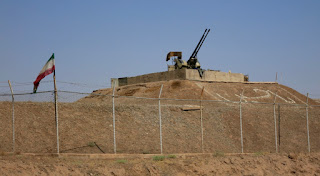 In Kashan we checked in in a traditional hotel, that is an historic compound of a building with courtyards with adjoining rooms. Very nice atmosphere. We had decided to stop our cycling here, as the road to Tehran is not fit for cycling; empty, hot, too long distances between towns
We spent 2 days there, visited more traditional houses, arranged a tour by car for the next 6 days and packed the bikes in bubble wrap. 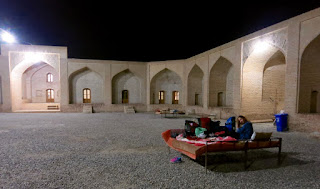 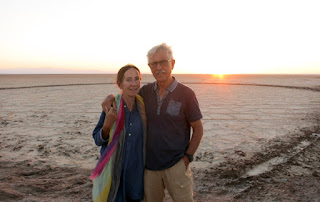 The first day of the tour we drove into desert passing real sand dunes, scores of wandering camels, an enormous salt lake and spent the night under the starry sky inside a caravanserai in the middle of absolutely bare nowhere, A very special experience. We got back to Kashan to pick up the bikes and continued north to Qom, a very holy city, dropped the bicycles in the baggage depot of the international airport and stopped in Qazvin. From there we visited Alamut, an ancient fortress on a steep rock far in the mountains of north Iran, and slept in Zanjan. We were driving hundreds of kilometers per day, crossing several mountain passes of over 2300 alt each day. The country is really mountainous here in the north, with the highest summit at 5630 altitude. 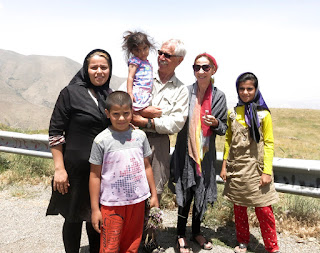 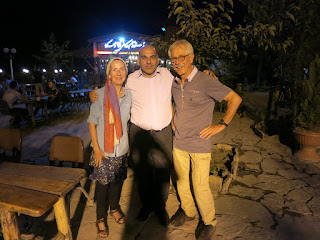 After a night in Masouleh, another mountain village clinging to the slope we found ourselves in Ramsar, on the Caspian sea. Back where we were a month ago. A nice evening on the shoreline there and now, after a spectecular ride through the mountain range we are in Selma and Masoud's B&B in Tehran. A homely place and we are part of the family. 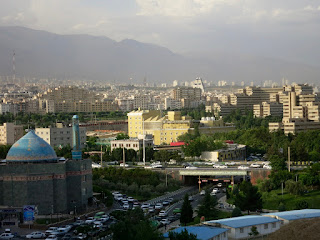