Trends are world wide.
We already noticed elsewhere in the world that the trends concerning fashion, music, outer appearance are world wide, independent of the local culture. Globalisation seems to be complete in this field. Also in Cuba, where there is such difficult acces to the internet and where tv-stations are government controlled, youngsters wear the same t-shirts and shorts as they do in Europe or Asia. Boys have this modern haircut, the sides of their heads shaved almost bald and a well cured haircut on the top of the skull. Girls (and women) prefer low cut very tight shirts and leggings or shorts. Not even a year ago we cycled in Iran, the contrast couldn't be bigger. 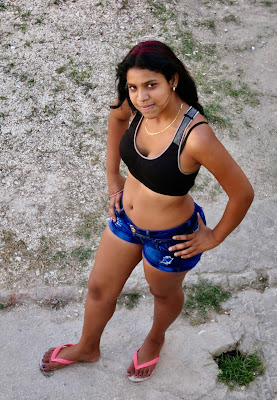 Cubans love music, and you will not easily find a spot where you don't hear a blaring loudspeaker. In Havana and east we mainly heard the typical Cuban music. Here we see boys walking around with getto blasters playing the music that young people seem to love everywhere, house or trash or whatever it may be called. Even from restaurants and bars the beat of the drums and the endless repeating tones attack your ears.

Alcohol.
Cubans love to drink. Beer is a favourite, but it surely must be mentioned that, not surprisingly for a big sugar producing country, rum is very popular. On Sundays you can see groups of men sitting around with many bottles of rum, drinking directly from the bottle. We learned to appreciate some cocktails here. You cannot be here without having been presented a mojito. Especially this one, rum, lemon, fresh mint leaves, water and ice cubes 'me gusta mucho'. 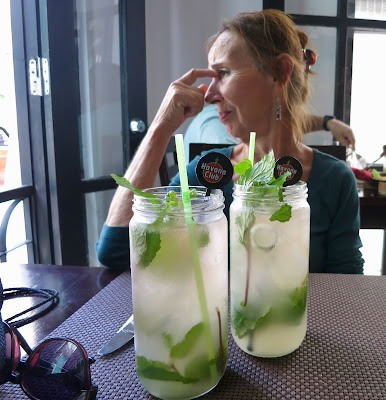 Pffff, thes Mojito's are really big.
In shops a can of beer is about the same price as in the Netherlands, in bars etc. they do up to 2 CUC. Too much for most Cubans. A full bottle of rum only costs 4 or 5 CUC. Not a very difficult choice for a Cuban working man, whose regular earnings are said to be 20 to 80 CUC a month.

Cuba can be very noisy. If there is no music, there is the traffic. Most cars, trucks and the many soviet tractors are old or very, very old. With old and very old engines. Most of them diesels. Also the numerous American cars from the fifties appear to have replaced their original petrol engines for diesels. So a passing vehicle mostly make you stop your conversation for a moment, as well as hold your breath in order to prevent your lungs from being blackened.
Modern touring cars are Chinese and they do not differ from ours. Buses for local transport or again very old and have the same qualities as mentioned before. It is said to see that most of inter local public transport is done on trucks that have been built up for human transport. In Europe I'm not sure if it would be allowed to transport animals this way. 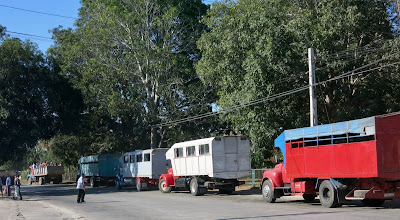 Buses
Rocking chairs.
There is no Cuban house without rocking chairs, as there is no veranda here without a matching pair of those neatly standing next to each other. Many houses are without paint and look ramshackle, but we were pleased to see a trend: when house owners are wealthy enough to take good care of their dwellings, they beautifully paint the walls of their house in mostly a combination of a main colour and a contrasting one. And then the colours of the two rocking chairs mostly match with the contrasting one. Very beautiful and tasteful indeed. Lobster
Lobster is a delicasy that we seldom eat. Not here. Though it's the most expensive dish, you can have it here for 12 to 15 CUC (=€) for one dish. Not bad. We have become experienced lobster eaters by now. 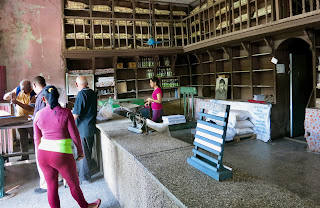 
For their daily needs the Cubans depend on the tiendas (shops). How they manage to get their things in the house I don't know, because often when we look into a shop we mainly see empty shelves. And then, we were told, it is much better than some years ago. The system reminds me of my early childhood; you stand and wait for your turn at the counter and the employee gets for you what you ask for. If in stock, of course! At such moments I feel sorry for the people here.