We moved to another hotel, the one that was booked ages ago together with the air tickets. A 14 km ride through only a small part of Seoul. The new hotel is nearly on the Han river bank. The route back to the river was completely flat, we simply rode round this awful hill.
On the last day of a bike tour like this there's always the challenge of how to pack the bikes. When we lack bicycle-boxes, like now, I usually use bubble wrap, preferably 1 meter wide and minumum 10 meters per bike. Where to buy such stuff? Jay told us that in summer this is nowhere for sale. In winter time Koreans buy it to stick it on their windows for extra insulation (winters are really cold here), so then shops have it, not now. But Jay had a solution! So what was the first thing that we saw when we entered the reception of the hotel? A big roll of bubble wrap standing among the suitcases against the wall. Jay had ordered it through the internet and had it delivered here! (Good idea, why not done that myself? Well, try this in Korea, not able to speak, read or write the national language!) Warmshowers friends are real friends, aren't they? So two hours later the bikes were packed and waiting for the transfer to the airport. 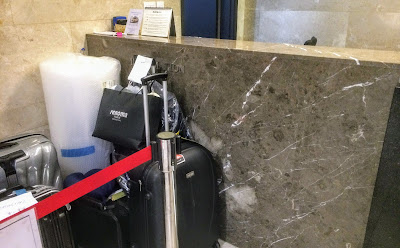 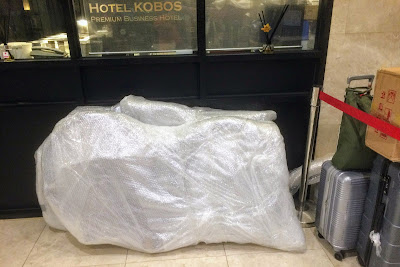 Alas, this transfer will only be tomorrow afternoon, once the tour is over we feel like going home and this last day will be a long one.
Finally some stats:
Cherry blossoms during the first weeks, other blossoms later.
Spring time: erratic weather.
One month Japan: 996 kms, 7630 meters ascent.
One month South-Korea: 1133 kms, 9806 meters ascent.
Total 2129 kilometers, altogether we climbed to a virtual altitude of 17436 meters.
Both are mountainous countries, reasonably heavy cycling.
Fantastic cycle-paths in Korea.
Very kind and helpful people, though in both countries language is a serious problem (very few people speak English).
Both countries are very much organized, Japan even more so than Korea,
A great feeling of security.