We spent some nice days in beautiful and agreeable Torino and we drove our car up a winding and hazardous mountain slope in the Susa-valley to join Gino and Anna for a traditional regional lunch, best described as delicious and nutritious.

On Monday we went to pick up the rental ebike by car, took it to Gino's, prepared both bikes for the journey, parked the car on a safe place somewhere in a street, had our last coffee together and left for the cycle path along the Po river.

From then on things went smoothly. Cruising along mostly unpaved tracks along the Po we reached our first hotel in Chivasso. Again we had to conclude how well the Italians have their things managed and how great the craftsmanship of the constructors is. The hotel, just average, was modern, well equipped, clean, beautifully decorated, design everywhere, nice with everything you wish and staff that is gentle, helpful and kind. This has been our experience everywhere until now.

20 kilometers after Chivasso we turned south into Monferrata. Hills, with tough slopes. But our machines assisted us beautifully and the panting and sore legs of the past remained of the past. We stayed in an Agriturismo near Cortanze, one of those steep mountain villages where the houses cling to each other in order to prevent them from collapsing into the valley together. No one in the steep little streets except for a stray cat and one women walking a dog (a very common phenomenon here). Again a wonderful luxurious accommodation, traditional and we were feated with a regional slow food dinner accompanied by a Barbera d'Asti. Can be worse.

Next day Alba, and today we're in an historic and enormous town villa in Cherasco, a huge house where we occupy the top floor. Hot water from arrival time plus two hours and in the morning from 7 to 9, breakfast tomorrow morning in the bar 100 mtrs up the street. But this street: the name is Via Vittorio Emanuelle II, which is normal, there is one in every town. But this one has an arch at one end, in front of our house and an arch on the other end. The little town is famous because Napoleon was here to sign a peace treaty with the Savoy king, who reigned Piemonte in those days. We even visited the mansion where this all happened, there is now an exhibition of posters of modern art exhibitions in the fifties and sixties of the last century. You see, there's always high culture to be consumed, even when you do not expect it. Today was a nostalgia tour anyway. In the morning we rode up (steep!!) to the fantastic belvedere of La Morra, where I already had been a couple of times during my work stays in this region so long ago. Then we cycled to Velso Mucci, the vocational school in Bra, to which I took 7 students of mine for a week in 1992 (93?) and where I met Gino for the very first time by stumbling into the classroom where he was teaching. As you may understand now, this has had major consequences. Of course there was no one there that possibly could remember me, though I have visited this school a number of times. History! But nice. Then tomorrow: Eveline will turn 72! Don't tell any one, no one need to know.

For more photos click on "All photo albums" and then "Piemonte" 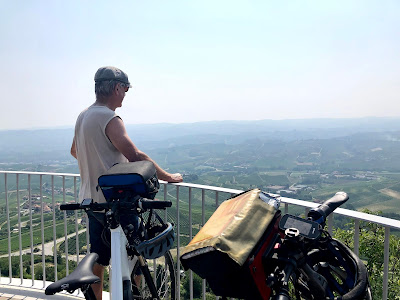 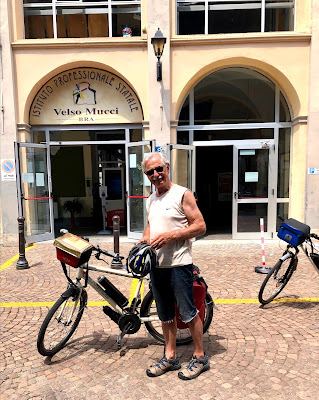