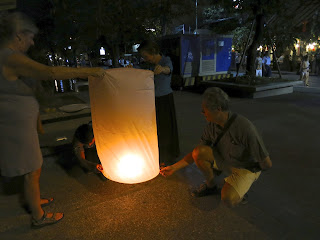 Together with our Breda friends we revelled in the festival. We went to see some famous wats (monastries) that were beautifully lit to the occasion and as our private climax we had a big paper lantern lift up in the nightly sky, where it joined the stream of hundreds more. A lovely sight and we tried to give it the intention that the ceremony should have according to the local Buddhist tradition (as far as we understood, that is), show gratitude and respect for the world and all its beings.

The next morning we packed our bikes, said goodbye to our friends, and left for Lamphun. Not far enough, we reached it at lunchtime and under an overcast sky we decided to head for the next provincial town, Ban Hong. Quiet roads, mostly flat, rice fields not green any more since the harvest was done or still going on.
Along the road we met a French couple, Theirry and Michèle. They are travelling on a tandem-bike. They started in Bruxelles, rode to Istanbul, took a plane there to Bangkok and are now heading for Chiang Mai and furhter north and east into Laos. They were happy to get our tips, as we have done the last part of their intended trip ourselves in 2006. A nice encounter it was.
The second day we reached Li and after that Thoen, We had to cross a (mountain)pass for that, Li's altitude is app. 475, the pas is 625. Now we are in Thoen, alt.200. Lower and hotter. Not much to do or to be seen, so a cool beer in the garden, some reading and blogging, and tomorrow off for the next stage. 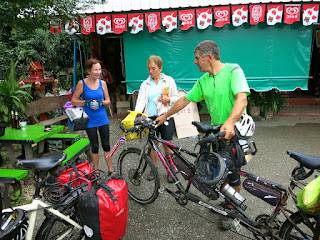