We're travelling again!
After a journey that altogether took almost 24 hours we arrived in Chiang Mai. Surprised again by the heat and troubled with the small and usual jetlag problems. After a slow first day and a long night sleep things are back as they should again. Bikes survived the planes alright too.
The first time here was Jan 2nd 2006. We started a 2-month bike tour from here, which took us through northern Thailand to the Golden Triangle and then the north half of Laos and back to Chiang Mai.
Now we're in the same hotel, which hasn't changed. It's still a nice place to be. But everything seems to be busier. The hotel, the city, there's more traffic and more people it seems. Times have been changing everywhere of course.
The city has a 600 year-old centre surrounded by a square moat of 1,5 kms each side. Four main gates remain and parts of the city wall. In this enclosed city there are busy roads but also surprisingly quiet lanes with houses and gardens, not to mention the monastries (wats). There are over 50 inside its walls. Many of them are stunningly beautiful, representing architecture dating from the Lanna dynasty, that we also saw in the south of China and Laos. On the day of our arrival we strolled through the premises of some famous monastries, had a lengthy conversation with a 21-year old monk and had ourselves covered in the culture as much as we could. We're lucky, it's the Kraetong festival these days. People are enjoying themselves in festivities including letting paper balloons go up in the sky with fireworks hanging underneath, long street markets everywhere, there is a parade in the evening and hundreds of floating candles and flowers are put on the river. Gratitude and respect, that's what it all seems to be about. We are happy to believe it and enjoying it with them. Great to be back.


Now we are relaxing of a short trial bike ride around the city. Not too nice, too many unavoidable city roads. But waiting for the special occasion tomorrow morning: René and Marijke, good friends and former neighbours of ours, will meet us here! It's a small world after all, isn't it? 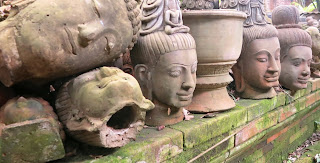