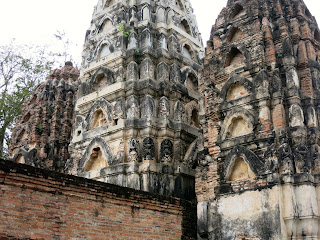 6 days and a good 300 k's riding brought us in the historical place called Old Sukhothai.
In order to achieve this we had to get over some minor passes (625 and 465 alt.) to leave the highland and reach the lower part of the country. Despite it's the cool season now we're pretty hot here and already quite tanned.

Old Sukhothai once was the centre of the kingdom (13th century) and at the height of its power it was wealthy enough to realize a beautiful walled city with lots of temples. An area of several square kilometers is now what might be the most important historical park of this country, including an historical museum showing and explaining hundreds of artefacts that have been excavated here. The whole park is all well kept and lovely and we spent a very agreeable and instructive day. It is very interesting to notice that the buddhist culture was originally influenced by hinduïsm, coming from India. This influence reached as far as the Vietnamese coasts and we remember having seen the same symbols used in the old Cham culture in Vietnam and in the Khmer culture in Cambodia. In our garden in Breda we have a linga and joni from Vietnam and we were not surprised to see some quite big specimen of them here.