Getting out of Armenia was an experience that reminded me of ancient, pre-1991 times. Ladies with absolutely expressionless faces tediously studying our passports with a magnifying glass before gesturing us out, without a word or a glance. Bye bye Armenia, pity that your border control is so unsympathetic  We liked you so much.

"Welcome to Iran", that's what the colleagues on the other side of the river repeatedly said. Passports were scrutinized, bags x-rayed, but everything with a smile. Then change money, since western bank- and creditcards are nowhere accepted in Iran. Good exchange rate, better than the app on my smartphone calculated!
The ride to Jolfa was undulating, it was windy and we had to deal with a thunderstorm. A bit spectecular, but we reached a guesthouse in due time. In the mean time we had been addressed by several people, men and women, and we had our first invitations to come and stay. When we were looking for a place to eat, Morat, a man who had been a tapestry vendor in Germany, addressed us, showed us a small restaurant, payed for our meals and invited us for coffee in his appartment.
In Marand we were met by Akbar, a well trained man on a brand new KTM-mountainbike. Not completely clear how he knew we were coming. He said that truck drivers called him when they saw cyclists. We stayed in his very basic accommodation, just a room with tapestries on the floor, a basic toilet and shower, not really clean. But he fed us and had a friend take us to an internet café, as he had no wifi. We were his 741st and 742nd Warmshowerguest in four years. And again we had chats and discussions with many people, sometimes in very good English. 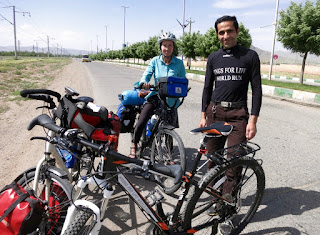 In Tabriz we stayed in a (for us) too expensive, but very nice hotel for two nights. Time to rest the legs a bit and get more used to this country. Did some sightseeing, among which a visit to the Azerbeidjan museum. It made us realize that the people in this region are Azerbeidjani, the province also carries this name. Iran is so big, 4 times France, that the population cannot but consist of several different ethnic groups. We had contacts with various persons, young and old. They come to you spontaneously, offering to help, offering tea or just eager for a chat, men and women alike, very kind.


There is this strange mix of tradition and modernity. People seem to have accepted that politically things just are what they are and they cope with it as cheerfully as they can.
Posted by Frans at 14:54