Reached Yerevan in six stages after Tbilisi. Not too long distances, but much climbing, as Armenia is only mountains. Stayed in nice and cosy B&B's and on Lake Sevan we spoiled oursleves with a “Best Western Bohemian Resort Hotel”. A whole mouthful. But considering what we got, a central heated (it was 5˚C) two-storey apartment with all amenities for €55, it was not too bad.
The landscape was overwhelming. From the border to Vanadzor an ever narrower gorge, then a wide valley with snowcapped mountains on both sides (3000+ alt. mountains) to Dilijan, then a stunning lake Sevan at 1900 alt. Highest pass 2000 alt.
Weather was not always fine. We had all, sun, rain and low temps.
And now Jerevan. Over 1 million populatian, we're staying in a homely B&B in the centre. Which is nice, some tree-lined avenues, many intensively used cafés, bars and terraces to sit, drink and eat, promenades, a beautiful central square, many musea, beautiful art. We saw old Dutch and Flemish masters, among which Rembrant, van Dijck, Rubens etc. But also very good old and recent Armenian artists. Jerevan centre is a great place to roam around. 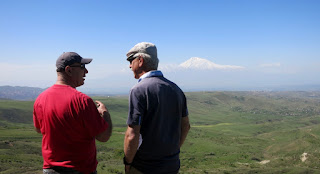 Today we made an excursion. Karen, our driver for the day, took us out of the city to Garni temple (1st century Greek) and further to Geghard monestary (Unesco heritage site). We were lucky, the clear sky gave us a full view of mount Ararat, the national Armenian mountain, 5137 alt., situated in Turkey now.(!) 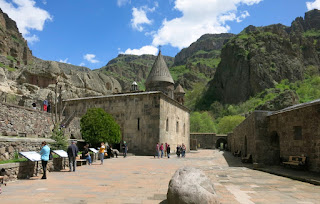 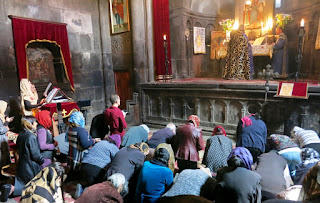 The monastery is high, at the end of a valley, a small compound with a church, partly cut out in the rock face, partly built. Originating from early christianity, but being destroyed and rebuilt several times. The current situation is said to be from the 13th century. There was a service going on. A small group of beleivers (women), two priests and some fantastic female singers. We stayed and listened quite a while, such a beautiful sound in such an historic environment and such a wonderful artmosphere. Could not last long enough.

After that we visited the Genocide Memorial and museum. Impressive. If one would doubt what happened in 1915 and the years after, here photos and testimonials make it clear. Numbers vary, but roughly 1.5 million Armenians died through political decisions made by the Turkish government. The images are at least as cruel and clear and deterrent as the images we know in our part of Europe from the holocaust. The similarities are striking.
Armenia's history is full of hardship. No wonder so many Armenians live in diaspora all over the world. 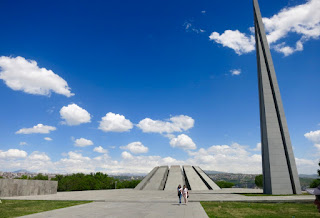 Our plan is to remain one more day in Jerevan then leave southward. Some mountainranges to cross before we will reach the Iranian border