Impressions from a passer-by.

Soviet citizens were not known to live in a consumer's paradise. But there was full employment, free health care and free education. After the collapse of the soviet union everything changed in the many republics of the union, for better and for worse. Armenia had it coming three ways: prior to the fall of the soviet union there was a major earthquake, killing 25000 and making tremendous damage and after war broke out with neighboring Azerbeidzjan.
Now, travelling on our bicycles through the former soviet republics of Georgia and Armenia, we observe some of these changes as passers-by. There is a big difference between the countryside and the cities. But, since we travel slowly and thus spend most of our time in the countryside, our observations are predominantly those of the rural areas. And in general these are not positive:
Cars and public buses dating from the soviet era. Very old second hand vehicles, not always complete, from all european brands and origin. Awfully many aged Mercedes Benz's and BMW's. Pot-holed roads, make-shift architecture. Delapidated and ill-maintained houses, paintless windows and doors. Abandoned factories, abandoned shops. Rusted corrugated iron, rotting concrete. Small one-man/woman shops everywhere, street vendors selling just one kind of vegetable, some blocks of fire wood, home-regenerated engine-oil in bottles. People walking along endless country roads. A man herding three cows in the road side. People waiting, waiting for a customer, waiting for a bus, waiting for something or waiting for nothing at all. Just sitting and staring in front of them. Worn out suits, track suits, a lot of smoking.
These are just some of the faces that poverty confronts us with. Most striking is the boredom that hits you from so many faces. It seems that too many people just have nothing to do. They sit, stare and wait for something and there is no perspective whatsoever that the waiting will result in something. And nearly always in an ugly and depressing environment.
Armenians often seem to grow their own food and rely on the greater family. We were told that an Armenian pension is €90 a month, average wages €220. Prices are very low of course, but still. Petrol is €0,70, a flat bread €0,23. Unemployment 19,6% (Jan. 2016), don't know about an unemployment benefit.
Though Tbilisi and the few other smaller towns that we passed through give a better and more modern impression these observations make the observer sometimes feel uncomfortable and realize how well off a west-european citizen is.


All this does not prevent the people from being very kind, helpful, hospitable and joyous, so as travellers we are fine and enjoying the journey. 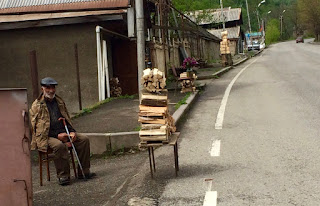 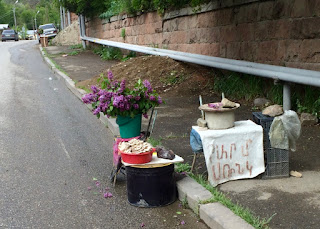 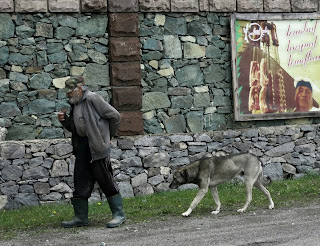 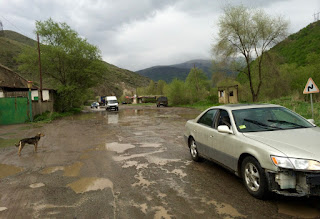