Yesterday we arrived back in Fukuoka, where we started our tour three weeks ago. We rode 996 kms, and doing so we made 7630 altimeters. The latter is not surprising, as Japan is nothing more than a group of volcanic mountains rising above sea-level.
The scenery outside the cities, and especially the parts directly along the coast, were mostly beautiful and frequently even stunning. 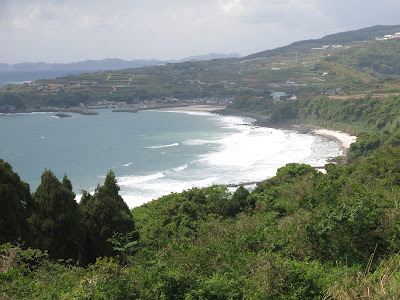 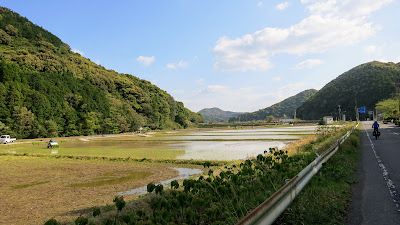 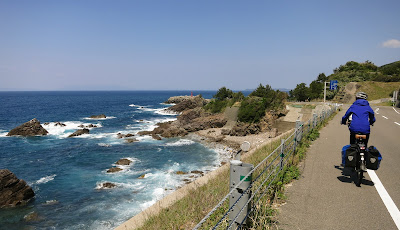 There were good days and lesser ones. One day we got entirely wet because of the constant rain, another day we had to struggle against a gale-force head wind, that sometimes blew us from our bicycles. But most of the time the conditions were nice.
Because of Japan being so mountainous there are not many roads between the various settlements. Consequently all the traffic is concentrated on these few connecting roads. So fairly often we were amidst heavy traffic, which is not ideal for nice bicycle touring. But never dangerous or scary.
Cyclists here are supposed to use the foot path, but using the main road surface is not a problem at all and thus we mostly did. The Japanese seem to love their cars, you see everyone behind the wheel. Young and old, workers, salary men, house wives in aprons, they all move around in their cars. And they drive just as they are, very law-abiding and respectful. So we were never harrassed by annoyed drivers. On the contrary, we always got all the space we needed. 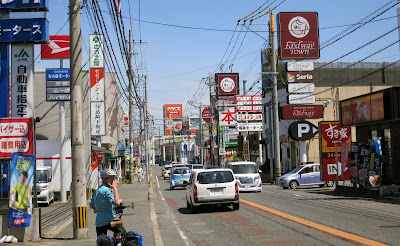 We don't consider the cities that we visited beautiful. Often really ugly. No comparison with our own continent, no historic and lively city centres, just high rise commercial buildings and lots of traffic. But places as Fukuoka, Kagoshima and Nagasaki were agreeable enough to spend some days, for their musea, Shinto shrines, Buddhist temples and atmosphere.

Mentioning that we find the Japanese law-abiding and respectful does not imply that we experience them as shy or humble. No, they are extremely polite and they bow a lot, but we find them friendly, helpful, assertive and witty. They just show a great loyalty to the rules and arrangements of their society. 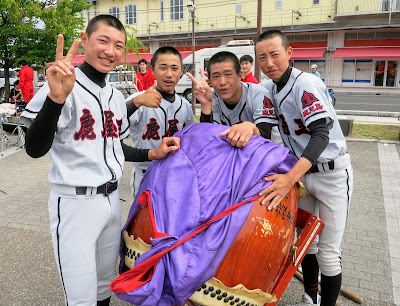