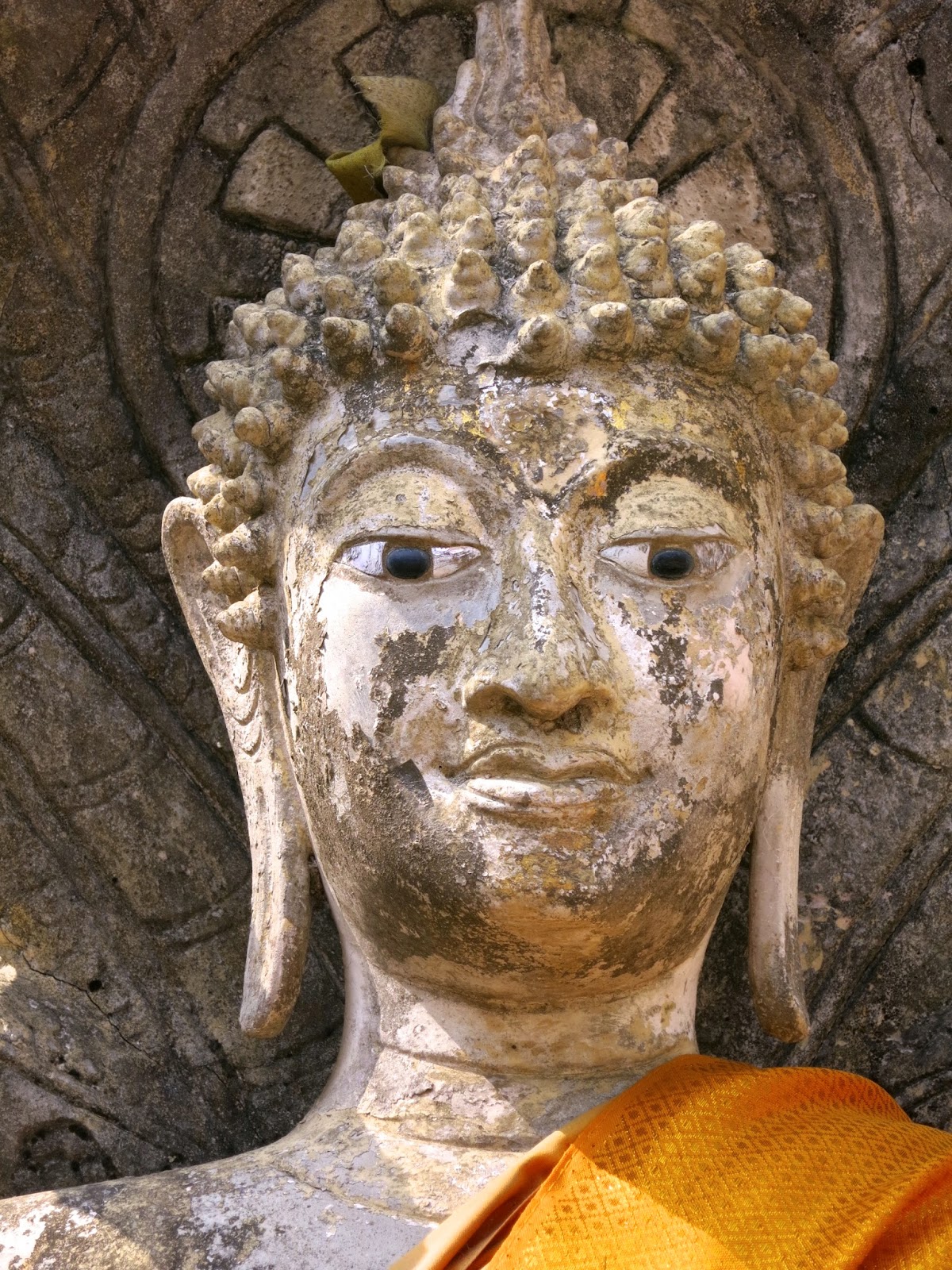 We spent 55 days in Thailand this time. We travelled south from Chiang Mai in the very north to the southern border with Malaysia in 40 stages and covered 2600 kms.
Thailand is a very easy country to travel in. There's a reasonable or good system of public transport, that we hardly used. We just used some longtail boats and (very fast) ferries. In general there is always and everywhere a motorbike taxi, a song thaew, mini bus or bigger available to bring a tourist to any destination.
Prices are very affordable, food, transport and accommodation are cheap compared to most other tourist countries. No wonder that Tailand is a backpacker's favourite. Low prices are not the only reason for this though. There's is the climate, always warm to hot, with a well defined rainy season, during which travelling is still very well possible.
In our opinion though it's the people that is the most important reason for this country being so easy. People are gentle and kind, they welcome you with a welcoming smile that in the beginning you must get used to. It's just so uncommon for a European. Maybe it's because we're on bikes that makes people even more friendly. Very, very often we are loudly greeted from far in a field, from within a house or a yard, from passing motorbikes and pick-up trucks, and don't forget the children. And then there often is this smile, displaying a genuine happiness to see us.
The main religion is Buddhism, and this certainly contributes to this open attitude towards us as farang (westerners). We tend to feel very positive about Buddhism and the effect that it seems to have on the people. Though there is another side to it. We spoke a young American, who had lived abraod many years and had now been a teacher for three years in this country. He told us that he had the same same feeling initially, but now he could hardly stand it any more. People are very superstitious, believe in the silliest tokens and act accordingly, don't learn to think for themselves, just reproduce. And are thus vulnurable for deceiving politicians (cf. our populists and the tea part in the usa) who make them scared and angry. The man was very dissapointed. On the other hand we spoke with a Thai who was very active in the current opposition demonstrations against the Taksim clan, who more or less owns and corrupts the country to the bone.
In the south part, the last app. 500 k, it was mainly Islam. Generally we noticed less acceptance and openess, even a kind of suspiciousnes in such regions, though we must say that we didn't feel that now.
The countryside is mostly beautiful. We rode past the endless and immaculate green of rice paddies in the north, through amazing Karst rocks and mountains, dense jungle, coconut and palm tree plantations, rubbertrees, fish-nurseries, fishermen's ports and white sandy beaches dotted with waiting long tail boats with the many coloured cloth wrapped round the bowsprit, there were hardly any stretches that we did not like.
Roads are mostly good, with side strips to cycle on. Sometimes busy 4 lane high roads, mostly two lane and more quiet. There are reaonably many newer cars on the roads, recent models, mostly smaller types as Mazda 2 and Toyota Yaris. This gives reason to believe that prosperity is spreading in the country and that a new middle class is developing. There's nobody who doen't use a mobile phone.
We stayed in the most beautiful and romantic accommodations to the most basic ones. The older hotels sometimes give you the idea of being in a prison. Prices varied roughly from € 8 to 35.
We spent time on beaches, snorkled, swam through caves, visited lots of lovely temples and musea if there were any and did what all tourists do. Besides that we enjoyed the Thai food, which is delicious and light, and mostly had it accompanied by well cooled beer.
Being bike-travellers gives us just that different touch with the land, the culture and the people. We loved it and enjoyed it. 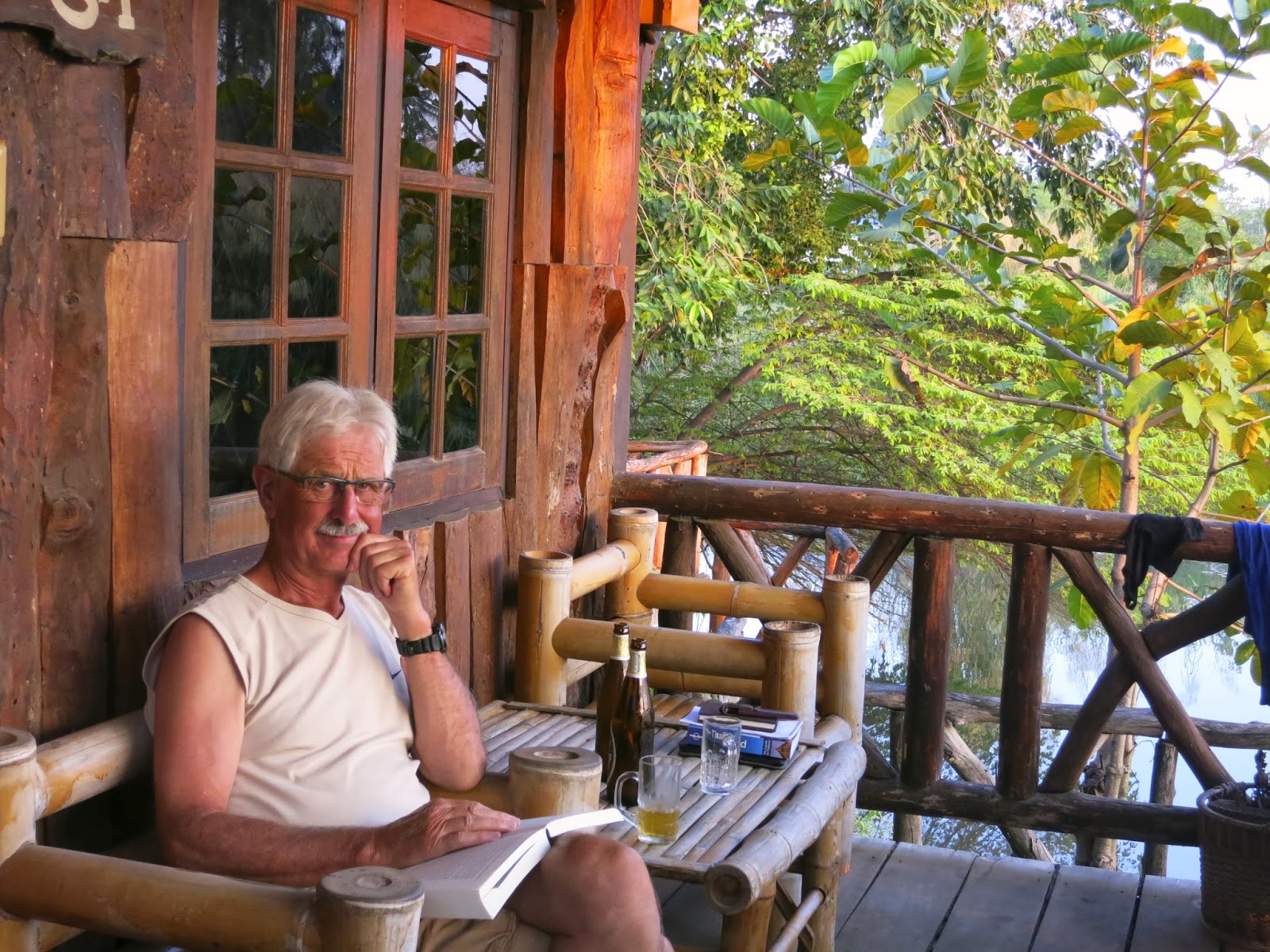