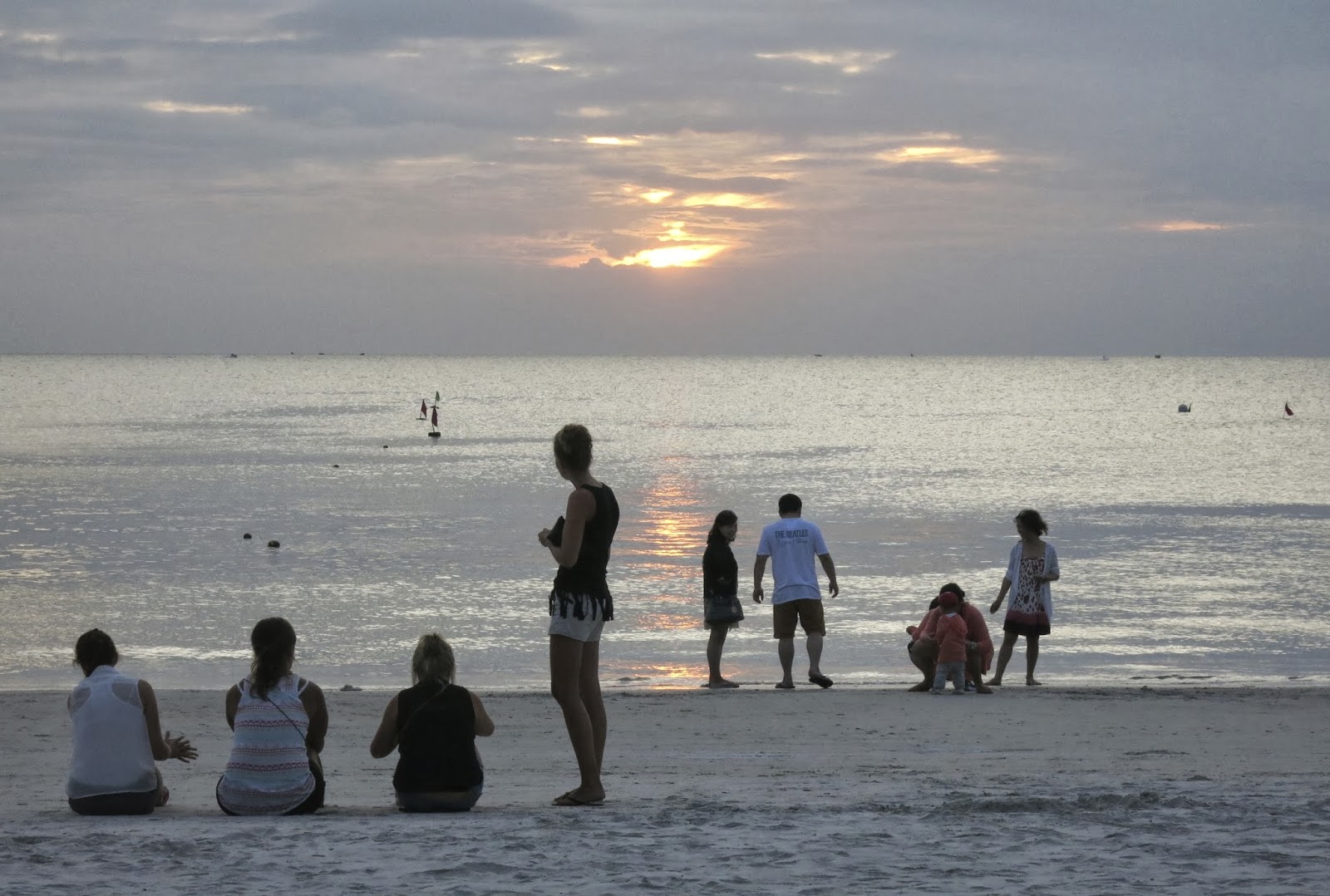 We got into Malaysia by ferry. Ferries here are only for passengers, they are fast, not expensive and run pretty frequently. Often they have closed cabins where as an extra service very loud karaoke is played from big screens in front and where the aircon is working so hard that people put on jackets and all they have in order not to freeze. Not completely unneccesary, though they are a bit soft on that here.
(In the streets you see many riders of the small motorbikes wearing a jacket with the back in front to protect themselves from the 'cold' wind, while temps are well over 30. Makes me smile.)

In the modern terminal on Langkawi pier we went though customs, bought a Malaysian sim-card and then we rode the 25 k to Pantai Cenang, where we found a not too nice bungalow. On the other side of the street there was the beach, behind an almost closed row of little shops, guesthouses and restaurants. Pantai Cenang is a tourist hotspot on this island and indeed, it's more or less crowded. We spent a couple of days there, lingering on the beach that, unless the many people, water scooters, air-bananas with people or parapents behind motor boats, is reasonably calm. Enjoyable, especially in the evenings, sunset over the beach, a drink on an easy chair in the sand, we did not complain.
By ferry we went back to the Malaysian mainland in order to ride to Penang island and the interesting city of Georgetown. It was a 3-day ride through a poor region. The villages were messy and dirty, and the people looked similar. Alor Setar though, where we stayed, is a city with a pretty centre and there were a couple of nice beach resorts along our way.

These days taught us how different it is to travel through this area. This region clearly is not set on receiving foreigners.u You may know how much we appreciate a cool beer after a hot riding day. And hot the days are, 35˚C is no exception. In these regions this comfort is not easy to be found, it's a pure muslim area. And the 7-Elevens that we so appreciated in Thailand are scarce here and they just don't have what we need. There are no things like a terrace to sit and have a drink on, only food stalls. These sell drinks as well (juices and when we're lucky they have ice-coffee), but it's not the same. Besides that all the women are wearing scarves and we hear imans chanting through strong loudspeakers in many places. The people are friendly and open, still it's different from elsewhere, less easy.

Another ferry took us to Penang island, right into the city of Georgetown. This place is an old settlement where once the Portugese, then the Dutch and after them the British ruled. All of them left their traces. But most of all the Chinese immigrants made this place whta it is now. Now there are clearly three major communities, the Chinese, the Indians and the Malays, and they live well among each other. They have their own cultures, often their own language but they work together in many ways. No ethnic problems here. (Though the government clearly favours the "original" Malay, who are muslims). English seems to be the lingua franca, certainly in commerce. The streets in the old centre are characterized by the Chinese shop houses. These are two story houses in rows along the street, with the roof beams parallel to it. Often they are combined with a similar house in the street behind, so that a long space is created with an opening in the middle. This allows a cooling airflow and such houses feel rather comfortable. 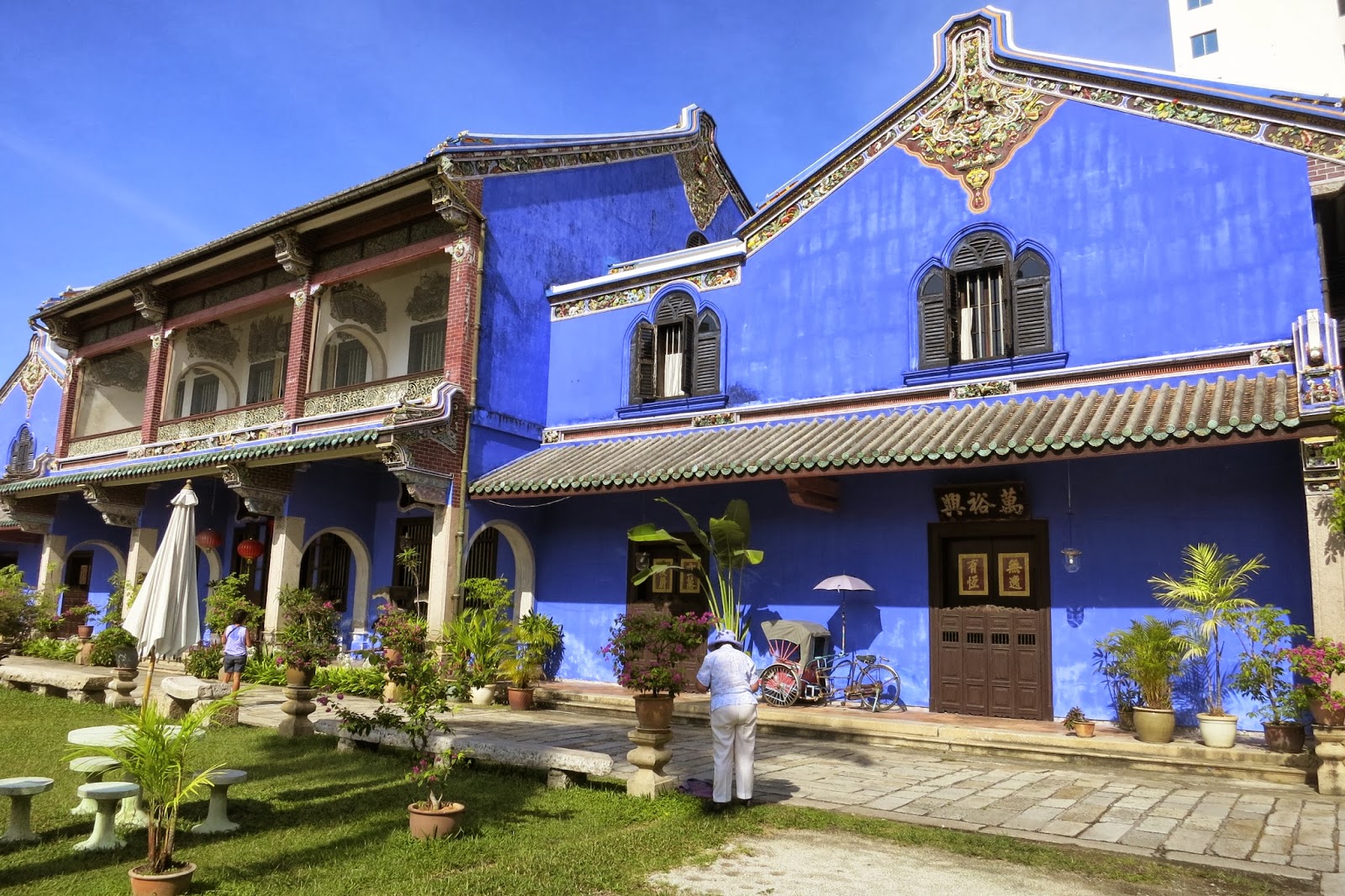 We stayed in (a not enlongated) one, Pedall Inn (more about this in a later blog). We roamed the streets, visited some museums, a grand temple, some well preserved clan houses and two houses of very rich old families, that in the past had been of great significance for the city. Streets are named after the group of settlers that used to live and work there, so there's Armenian street, Little India, Burma road etc.There's a creative spirit which shows in the remarkable street art on walls here and there. It's an agreeable spot on the globe, we felt comfortable here. 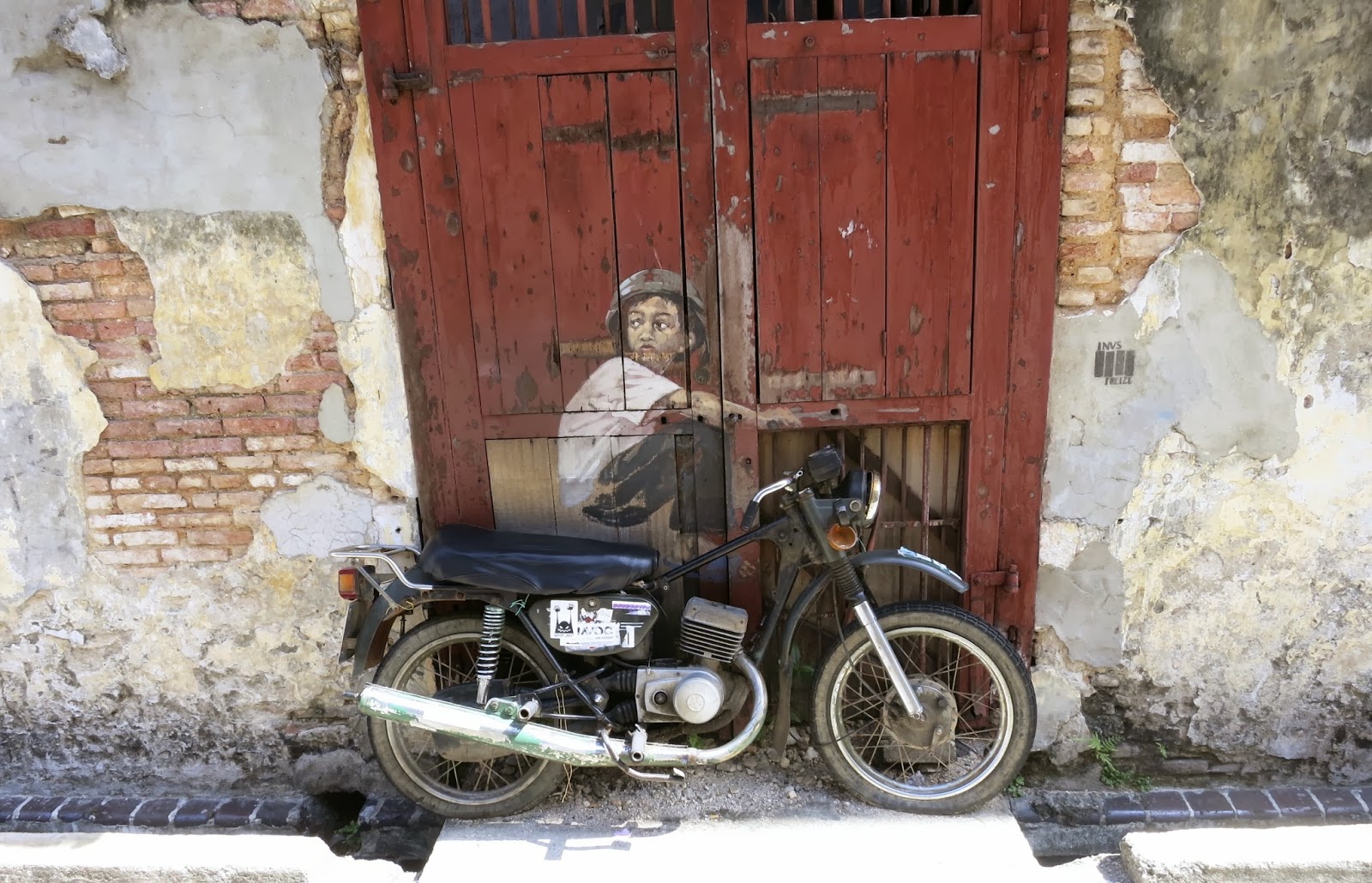 As an extra we witnessed the first day of Thaipassum. This is an annual Hindu celebration during which they have a long 2-day lasting procession through Georgetown and where all Hindus seem to gather in their best clothes, with gifts for their deities, with burdens carried and coconuts smashed on the streets. An event!