We hear it every day. Tea, tea!
Now it's a couple of truck drivers who loudly invite us to join them for a cup of tea brewed in their lorry, the other time it's the father who is building another family house with his sons and sons in law, or it's one of those numerous elderly men who are sitting in their local tea-houses sipping tea, playing cards or just staring in front of them. We have decided to accept these invitations every now and then. It's a welcomed break in the sometimes streneous cycling (hilly country!) and it's always an opportunity to make contact with kind and gentle people and every time we enjoy it. It's what travelling on a bike makes so attractive.
When checking in in today's pansiyon the owner, also shoe seller, did the same. As soon as we had agreed to take the room and accept the price he shouted more than he asked: “Cai?”. Of course we did accept. He then took a kind of walkie-talkie from a shelf and shouted “Cai” in it and repeated it a couple of times. We were not surprised that a minute later a man appeared from across the street who carried a tray with three tea-glasses. We sipped it and the incomprehensible conversation in Turkish added to the fun. 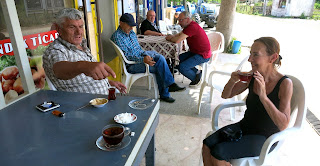 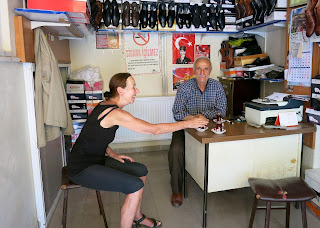 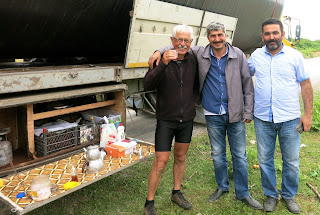