There are not many of them in Turkey. As in all countries where cycling isn't part of normal life. In western Europe you find many, in Australia, the States and several countries more, but not around the Mediterranean. Warmshowers hosts I mean. But we found one. In Erbaa, a small town east of Amasya.
Amasya is a beautiful and very old city in an akwardly narrow valley. We stopped there to give our legs some rest and because it is such a beautiful place: the graves of the Pontic kings dug out high in the rock wall, Ottoman mansions, fine mosks, parks, river bank and some musea. We stayed in a restored caravan serai, formerly used as gathering point of the convois of traders from all regions who met in this junction point. Now it's a posh hotel, we felt that a bit of luxury would not do us much harm. Mind, prices still a good deal below a normal hotel night in our regions.
We witnessed shows of folk dance groups from the neighbouring countries and found them quite exotic. Very martial Ossetion boys, tiny Kirgizian girls, Azeris, Bosnians etc.
We also had to spend time on planning the next part of our route: where to ride to? We were absolutely not sure what our possibilities further east were, as we could not find a route where we could find accommodations at regular distances. On the internet that is, asking a person is impossible since hardly anyone speaks any other language than Turkish. When I opened the Warmshowers-site, just in case I thought, we were so surprised that in a day's ride distance there was one, and after an email we knew we were welcome. So the next day we rode 80 k downhill to stop at the house of Kayahan Sayin and his wife Gülten. Both teachers and modern and non-religious people. In this country the latter means something, it will be impossible to make a career in education for instance. But they are happy people, Kayahan is even – just as I was myself – active as a European project manager. Turkey does not belong to the EU, but as a so-called associated member they can apply for projects.
As Ramazan (yes, here with z) started just that day Kayahan's first advice was to get on a bus and ride to Georgia in order to escape closed towns and villages in this conservative part of the country. But we are cyclists...! So then he mentioned the “teachers' houses”, ögretmenevi. And that was the solution: in every district centre there must be secondary schools, so there must be teachers and as a consequence there must be teachers' houses. Places where teachers who live too far away from their school to daily commute can stay during the week. And these houses also take other guests. They are cheap, clean, and as we have already experienced now, as good as a simple hotel and sometimes even better. Then these houses can easily be spotted via Google, just type in the name of a town that you want to pass combined with the word ögretmenevi; they are all there. It didn't take too long to find out that we could plan our route to the Georgian border completely. Problem solved!
We celebrated this with our hosts with some good beers, most likely our last ones Kayahan said with a grin.
We stayed one night with these kind hosts and now, three days later, we are in an ögretmenevi at an altitude of 1600 meters. Tomorrow we will cross a mountain pass of 2160 altitude and arrive in Erzincan, a bigger town at an altitude of 1200. Will be a fresh day! 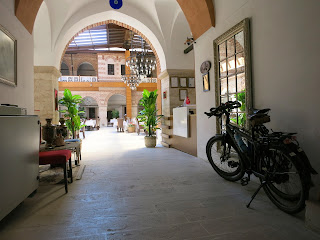 Our hotel in Amasya 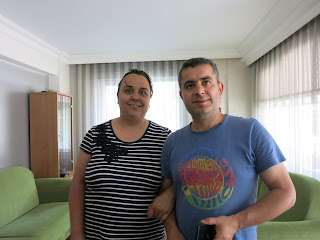