Today was election day in Turkey.
During the last few weeks the Dutch media suggested that there was much tension in the country during the campaing period. Indeed there was a bomb attack in Dyarbakir in the eastern Kurdish region.
We as travellers in Turkey didn't notice anything of the kind. What we saw were some streets and squares completely covered in party banners, some stands om Taksim square in Istanbul and every now and then a stickered party mini-van with speakers on top making a lot of noise. That's really all. Never we noticed that people were anxious or occupied with the subject. Even today, election day, the first thing we noticed concerning this democratic process was that no alcohol was being sold: prohibited today. So no afternoon beer for us today, ehhh, well, secretely, if we were prepared to have it inside where no passers-by could see us we could :-) .


And in the evening during dinner there were some guests very much interested in the election program on tv in which the first results were shown by two rather agitated presenters. We ourselves initially thought that Erdogan's AK party was doing well (as expected in the polls), they kept having app. 43%. But then again a couple of hours later it was the Dutch tv-journal that made clear to us that after 12 years AK was losing it's absolute majority. They used to have over 50%. So for the first time they will have to share power. From earlier conversations we know that many modern Turks will feel releived. 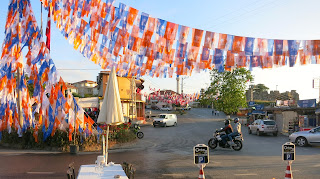