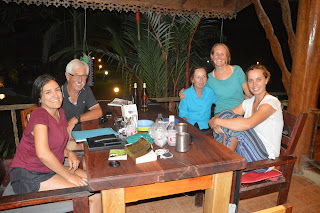 During our Australian tour we heard those words very often. We started to think that Aussies easily get exited about something. Whenever they were enthousiastic about something they exclaimed: “Isn't that amazing?” and “Awesome!”. In the beginning we thought that we had to go and see or do what was said to be so amazing and awesome. Very often we found it interesting maybe, nice, but amazing, or awesome.....? We then looked at each other and wondered where all this enthousiasm originated from.

But what happened to us this Christmas really does deserve the terms amazing and awesome. When we were in Melbourne this January (2013) we stayed with the Warmshowers hosts Jude and Astrid. We spent 4 or 5 days in their cosy home while we made our Melbourne city discovery excursions. And we enjoyed the company of this lovely couple, who only had joined Warmshowers shortly before, as they were planning their dream trip : cycling from Melbourne to Scotland. In April they set off and, to make a long story short, our paths crossed exactly with Christmas in Khao Sok, in the lovely garden guesthouse called Nung house. Can you imagine the excitement when we actually met, and the shouts and screams that sounded through Nung house garden?
We then spent some lovely evenings and made a hike in the National park together. On Boxing day we left and said goodbye. The ladies promised to see us again some time in 2015, when they will have reached Breda!
Well, isn't that amazing? And awesome?


I think it's even more, it's brutal! 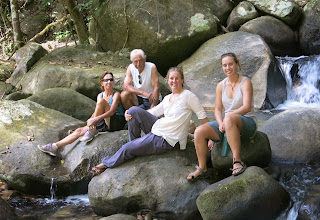