The bridge over the river Kwai

It took us two days of 95 k each to get from the old historic Ayutthaya to Kanchanaburi. No one will know this city, still it's the seat of one of the most famous tourist attractions of Thailand. It's here that the so called “Death Railway Line” crosses the Kwai river and of this fact we are all very much aware after the movie with Alec Guinness.
This railway line was constructed during WW II under the Japanese occupation of Thailand in 1942-43. It was meant to dramatically shorten the supply route from Japan to the west-Asian countries like India, Iran etc. Unimaginable to what extent the Japanese expansion must have reached in the minds of the Japanese politicians and military.
This railway connection, crossing the Thai peninsula and making it uneccessary to use the straits of Singapore with all its perils, was considered before by the British and rejected as being impossible. Rugged terrain, harsh climate. Still the Japanese army, with their skilled railway engineers, realised to build the app. 500 k line in 20 months. A fantastic achievemant, were it not that it cost the lives of an estimated 100.000 people. To do the work prisoners of war and forced labour of Asian people were used. Most POW's were British, many Australian and also a great number of them were Dutch military of the KNIL (Royal Dutch Indies Army). The latter had been captured after the capitulation of the Dutch East Indies. Thousands of them perished because od tropical diseases, malnutrition and maltreatment by their guards. In Kanchanaburi there is a war cemetery with almost 6000 graves, 1800 of them Dutch. There are no graves though of the multitude of Asians forced labourers, They were buried unidentified in mass graves that cannot be found anymore.
The bridge that is the tourist attraction now is not the one we know from the movie. There were two bridges built, first a wooden one (movie) and immediately after that a concrete and steel one. Both were bombed by allied forces in june 1945 and reconstructed later. The wooden one has dissappeared completely now, the steel one is still in use, though mostly by tourist walking to and fro. Like we did ourselves.
There are two war musea. One is next to the bridge and is a bit of a freak show of all kinds of parafrenalia that have to do with this war and other ones. A really good museum, that tells the story of the railway line and the war in this part of the world in general, is the “Thailand-Burma Railway Centre”, adjacent to the war cemetry.
It took us hours and hours to see all this and to try and grasp the impact of war on peoples' lives and the world's history. Time to process all this on the verandah of our bungalow, that is standing on stilts on the muddy banks of the Kwai river and that offers all the facilities that are necessary to do so. 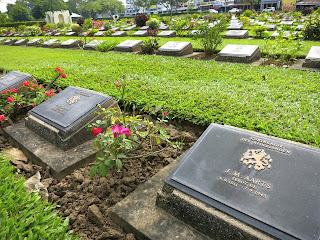