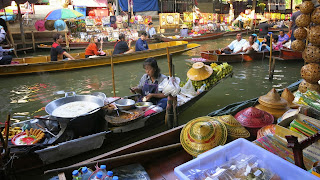 The last few days we passed through the Asian equivalent of the typical Dutch polder landscape. It is low and flat land consisting of long and small pieces of land separated from each other by ditches, narrow and bigger canals, here called klongh.
In Holland these patches of land are generally used as grassland for dairy cattle or vegetable growing, here it was mainly coconut palm trees, for miles and miles. Roads have been built only during the last decades and we had to cross hundreds of bridges, sometimes very steep too.
This is therefore a region well known for its floating markets. These are places where traders, farmers and consumers meet, not on hard soil, but in their long boats. Trade is being done in and between boats. Originally this was necessary, since waterways were the only “roads” available. Now these floating markets have become more or less obsolete, still there are a number of them functioning and indeed, a lot of traffic is still being done on the water. Every family house is on the waterside and there is a boat moored along it.
We passed and visited the famous floating market of Damnoen Saduak. There is probably not a single person in the entire world that has not seen photos or commercials of this market. It's the calender and brochure spot of touristic Thailand. Colourful indeed, and for tourists only now. Like we have Volendam and Marken in the Netherlands, they have Damnoen Sadual in Thailand. So OK, been there, done it, got the t-shirt.


Today we spent in Petchaburi and behaved as tourists should. We visited a 1000 year old wat (monastery), an art-deco royal palace (and art deco is very rare here), a tempel complex on a hill that is owned by thousands of monkeys, who are very self confident and fortunately fully ignore human beings, and a cave with a reclining Buddha and wonderful light coming in. Tomorrow we will stop being tourists and become travelers again. 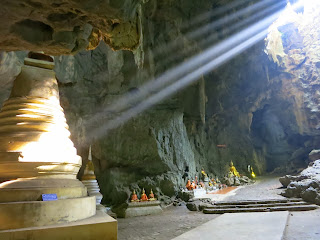