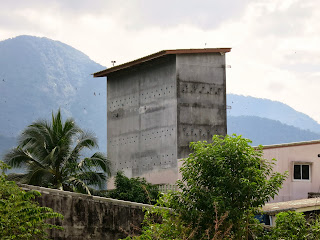 We have seen some new things recently. On several occasions during the last weeks our attention was drawn by the noise of a great many birds. Closer investigation revealed that each time the loud shrieking bird sounds came from tower like structures. Concrete towers up to five stories high with no doors or windows, just an opening in the top floor of mayby one square meter. Swallows (I think swift or screamers, Gierzwaluw in Dutch) are swarming around these ugly structures and flying in and out. We were told that these towers were built as to give the birds a place to make their nests, which they make mainly from their own spit. Then the nests are harvested and sold at high prices as a delicacy in countries like China and Korea. 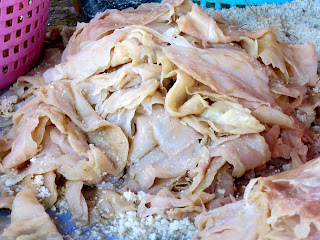 This is not all. At the moment of writing we find ourselves in a swampy delta area along the westcoast. Here we witnessed the harvesting of another delicacy for the consumers in the countries mentioned above. Jelly fish (kwallen). They are caught at sea and then further processed (dehydrated) in nurseries as far as we could see. Thousands of pizza-size snotty pancakes were being gathered out of knee deep basins of app. 6 x 6 meters, sorted, generously salted, put in plastic crates and shipped of in trucks. Smelly affair, bon appétit!!
It's not a secret that the peoples mentioned above have more (in the eye of the westerner) strange, and sometimes unwelcomed, favourites such as dogs, shark fins, rhinoceros' horn, tiger balls and claws, ivory. And think about whale meat in Japan and Norway. And what about hamburgers and coke in the USA? :-)  A traveller will never stop learning and will keep realizing how deeply cultures vary and that real understanding each other is next to impossible. Each one in his own right, but some missionary work could be done here and there. 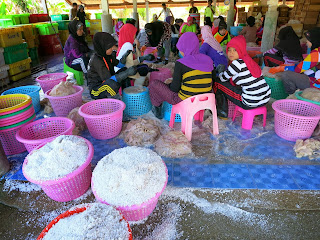 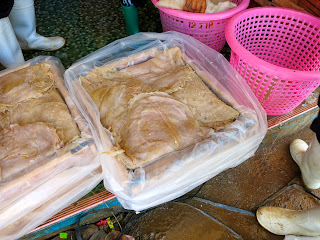