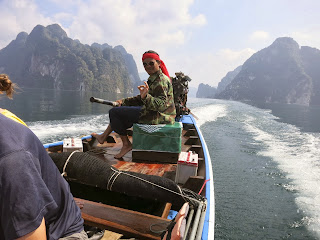 This was the motto of Tu, our boatsman, waiter, jungle and cave guide.
We made a tour to the lake of Khao Sok National Park. It's artificial, the damm was built in 1982 and on that occasion the surrounding area of app. 1000 square kilometers were designated as national park. The most beautiful one of Thailand, some say.
Though we were staying at the park's main entrance, we had to travel in a song thaew (an open pick-up truck mini bus) for one hour. Then we got on a long tail boat for another hour. These open wooden boats can accommodate some 10 people, for the propulsion they have a car engine on a lever, that is the helm at the same time, and they go very fast (and noisily).
Tu warned us before that we would get wet by the spray of the boat's bow. We would get wet anyway, since we were going to walk in a cave and we would have to swim to get through it. “No wet, no fun”, he said.
Well, we got wet. Not in the beginning when he cruised gently past the magnificent Karst cliffs in the lake. Then he speeded a bit to get to the floating guesthouse, where we had a perfect lunch. After that we made a 7 k jungle hike and a 1.5 k cave crossing. We followed a little river under the mountain and indeed, most of the time we had to wade and at certain points the water in the narrow corridors was so deep that we had to swim. Was a beautiful sight, ten of those little head torches wobbling over the water in the pitch dark cave. Later some said they had been a bit scared......
We all survived and were very satisfied about the whole expierience. A highlight of this journey.


When we returned over the lake we were a bit late and Tu revved up his Isuzu 95 hp car engine a bit. Again we got really wet. But, as said before: “No wet, no fun”.